The American flagfish is among the few American pupfishes, and it belongs to the Cyprinodontidae family. It grows to about 2 inches (5-6 cm), and it has a colorful and bulldog-like body.

The American Flagfish is extremely colorful and peaceful fish. The fish is native to Florida which contributes significantly to its scientific name. This peaceful, small fish displays different vibrant coloration with males becoming more colorful than females.

Besides being a community fish, the American Flagfish is also an effective consumer of algae. The fish is considered one of the very few species that feed on pesky black beard algae.

That is why it is popular in outdoor ponds thanks to its ability to control algae and insect larvae. It is a voracious eater, and it will deal with any alga booms in an aquarium.

The fish derives its name primarily from the features of the male, which resembles the flag of the U.S.A. There is a dark rectangle on the male’s shoulder that is acknowledged as the field of blue and white.

On the sides of the body are stripes that appear red and ‘white,’ which is more creamy-green than white. Its iridescent scales shine like stars under the right lighting.

The American flagfish is present in Florida to the Yucatan Peninsula. Wild populations have adapted to slow-moving marshes, ponds, swamps, and lakes.

It was first described in 1879, where Lake Monroe in Florida was given as the type of locality. Its scientific name is Jordanella floridae in honor of the American ichthyologist David Starr Jordan, and it is related to the Yucatan flagfish.

The fish can easily adapt to different water conditions both in the wild and in captivity. That is why you can mix them with different species of fish especially from the tropical region.

The American Flagfish is known to occupy the topmost levels of the water column in their habitat. However, it inhabits all regions of the tank more than any other fish species.

It is likely to jump outside the aquarium if it gets the chance to do so. For that reason, you must keep it in a tank with a hood, lid or canopy. You can place it in an aquarium with significantly lowered levels of water.

Unlike many species of tank fish, the American Flagfish will not or nib at the aquatic plants inside the tank. It will just appreciate the cover provided by the same plants especially if they are the floating type.

Although flagfish are considered easy to keep fish, there are still some requirements you need to take in consideration:

The fish are quite small, and they can be kept in a minimum of 10 gallons. A pair of them will be comfortable in a 20-gallon setup. The American flagfish thrives when kept in groups so you should get a bigger tank to accommodate six of them or more.

A dark substrate will create a stunning contrast with the colors of the fish. Sand and gravel-based substrates are ideal choices for an American flagfish tank. You can also select dark-brown varieties if you have dark fish such as black mollies in the aquarium.

You can use rocks, driftwood, and roots to provide hiding spaces for the fish. Include plants along the rear and sides of the tank and add some floating varieties.

The Java moss is a favorite of this fish since it creates thickets that the fish can hide in. Leave the center of the tank open for the American flagfish to swim.

The fish likes minimal current, so do not install a very powerful filter. You can use an air-powered sponge model which will also protect the fry which are often sucked up by other kinds of filters.

LED lights will enhance the colors of the fish and create a shimmering effect in the water. Use plant cover to minimize the light that gets into the tank’s bottom, so that the fish feels safe to venture into the open areas.

The American flagfish is adaptable, but you should maintain a pristine aquatic environment.

When it comes to filtration, the fish will be fine with a turnover of 4-6 times an hour. The fish can also survive in salty conditions, as long as the salinity levels are kept between 1.000-1.005.

Wild American flagfish are omnivores, and they eat algae, crustaceans, algae, plant matter, and insects. They will appreciate regular feedings of vegetables like zucchini bits and lettuce.

Provide high-quality flakes and live or frozen food like brine shrimp, blackworms, brine shrimp, daphnia, and bloodworms. They can be seen picking up particles from the sponge filter and glass.

If there is algal growth in your tank, you can refrain from feeding the fish and let them clear it up. You should also substitute with algae wafers if there is no algae. Don’t forget to provide them with some vegetable matter like the blanched spinach, lettuce and kale among others.

Some aquarists have successfully kept the American flagfish in community tanks, but you have to be careful about potential tankmates. The males are reported as being somewhat territorial, especially if there are too many open spaces. When it comes to keeping males together, include a lot of decorations and plants that they can use to establish territories.

In the tank, the American flagfish is often preoccupied with the search for algae. They establish resting positions near the base of plants, although they will hide if kept with bullying tankmates. The young are especially timid, and you may find it hard to spot them as they are always hiding.

The fish can nip the fins of colorful species like bettas and guppies. It is better to keep them with fast swimmers like tetras. Colorful and schooling varieties like neon tetras and rummy nose tetras are good tankmates.

Sometimes, the American flagfish become relatively easy to raise in a tank. They can survive better with the slowest tank fish you can think of. A pair of this fish species will have a good time in a 10 gallon planted aquarium. But if you want to include more peaceful and slow-swimming fish,  you may reach out to a 20 gallon tank or even a larger tank where you can keep at least six or more fish.

For community tanks, the situation might be different. The American flagfish is likely to display different traits with other fish species. They can become too energetic and harrass slower fish. So it is wise to keep them in a community tank with the tank mates they can keep up with in terms of speed and temperament.

But if you are planning to keep your American flagfish with some more placid or slow swimming fish, it is advisable to consider an effective aquascape. This structure will help break the line of sight of your flagfish to allow the other fish to have enough time to rest and enjoy their new habitat.

The American flagfish is easy to breed, and you may come across fry from time to time if they are kept in ideal conditions. They seem to reproduce in winter or spring. If you intend to breed them, you need to be sure that you have both genders in the tank. Males are more colorful while females have a rounded belly and a dark blot on the dorsal fin.

A separate breeding tank will increase the survival rates for the fry. Furnish the set up with floating plants, an air-powered sponge filter, a fine substrate, and spawning areas. Add hiding places as well for the female to retreat to in between spawns. Males can get quite enthusiastic during the courtship and push the female hard.

The mating pair engages in a courtship dance that can be started by either of them. The male has been seen performing backward flips to entice the female. The pair will then swim closely where the male attaches himself to the female American flagfish from below, and eggs are released in quick jerking motions. The process is repeated until the fish are done.

The eggs attach to the surface via a sticky thread and are often deposited in a hole created in the substrate. The male can be seen guarding the eggs and fanning them with his fin. Remove the female since the male can become aggressive. Remove the male after 7-10 days as the eggs will have hatched.

Use a soft filtration system since the juveniles do not like strong currents. The tank should be shallow for the fry to reach the surface. Feed them brine shrimp and microworms to boost their growth.

The American flagfish is a darling in the aquarium trade because of its colors and algae-eating behavior. It is easy to keep and breed the fish, and you can keep it with schools of tetras and danios. 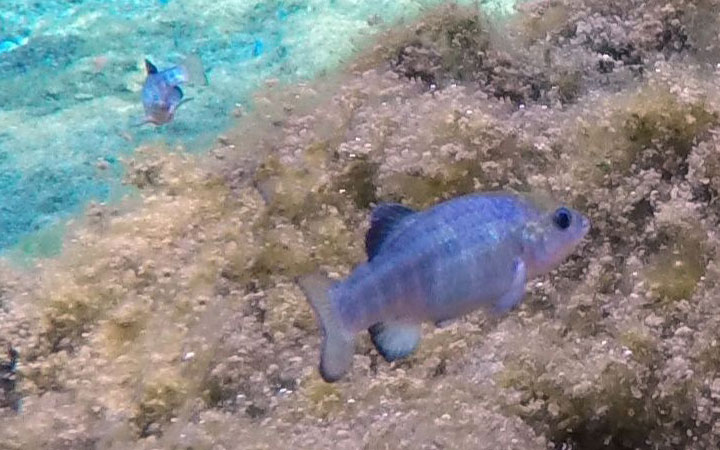 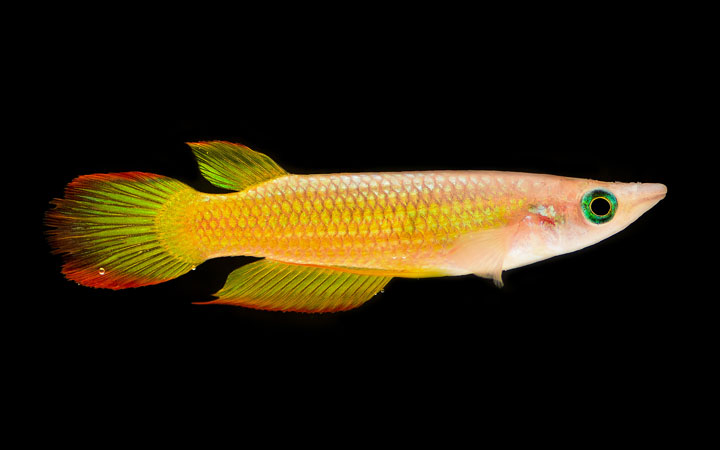 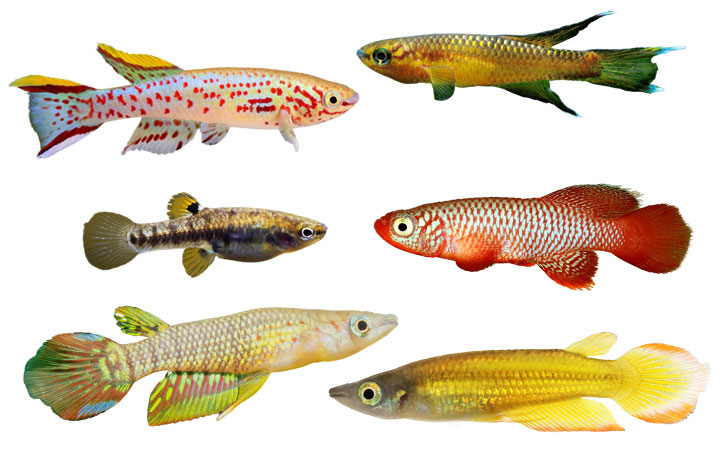 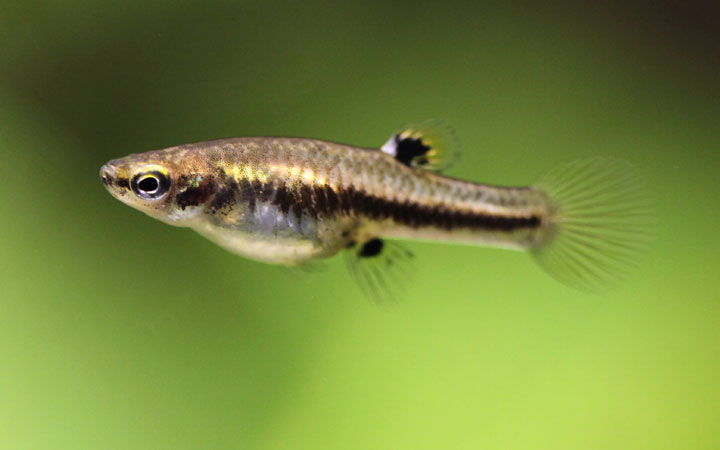