Fish-keeping is getting more popular as more and more brands provide affordable aquarium solutions for homes. While thinking of getting an aquarium, you have to identify the fish species you intend to rear.

Some species are favorable for beginners because they are hardy, while others need more experienced aquarists since they are sensitive to water conditions.

There are multiple factors to watch out for when keeping fish, including temperature, tank size, PH, substrate type, and tank mates. 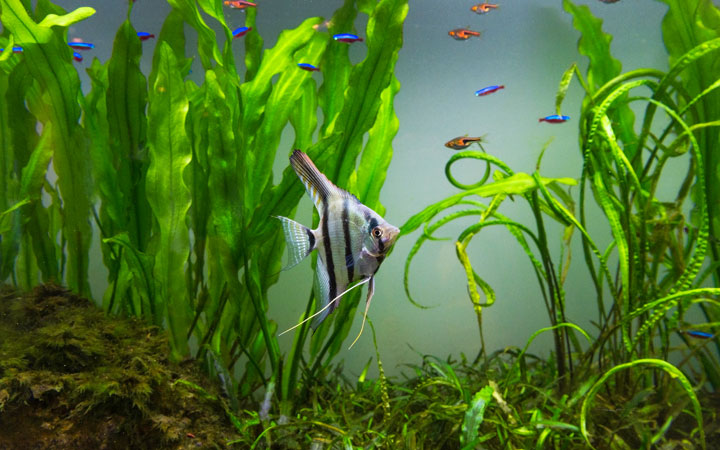 Below is a list of the most popular aquarium fish you can keep in home aquariums: 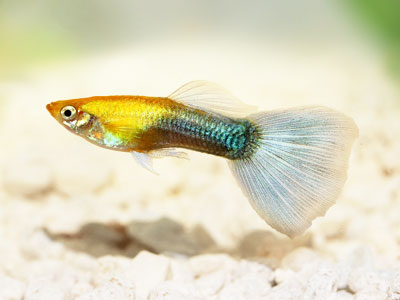 Guppies will brighten up any tank thanks to their lively colors. Breeders have been creating new strains with even more vivid colors, so there are plenty of varieties to choose from.

It is advisable to keep guppies in tanks of 10 gallons and above to give them space to roam. Most aquarists keep guppies together as they are a shoaling species.

If you want to have a community tank, avoid coupling guppies with aggressive fish.

You can rear guppies with tetras, mollies, gouramis, and platies. Male guppies can easily stress out the females, so it is recommended to keep more females than males in the same tank.

When it comes to feeding, ensure that you give your guppies high-quality flake foods that are rich in protein. Supplement these meals with frozen and live foods and small pieces of vegetables. 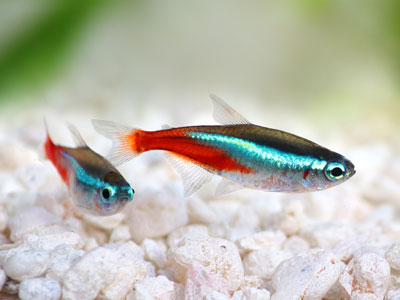 The Neon tetra stands out because of its unique coloring. Its back and head appear light blue while an iridescent blue stripe stretches from the nose to the adipose fin.

Neon tetras are indigenous to warm rivers in such South American nations as Peru, Brazil, and Colombia.

Their lively colors are an adaption to help them find each other in the murky rivers that flow through dense canopies.

Your tank should, therefore, be densely planted to mimic these natural habitats, and you can also use a dark substrate, small pebbles, and driftwood.

The PH should range from 6.0 to 7.0 and 70 to 81ºF for temperatures. Neon tetras should be reared in groups of 15 to 20, and you can couple them with other peaceful and small fish like gouramis. 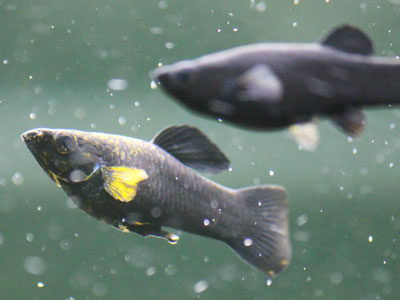 Mollies are popular among fishkeepers for their hardiness and adaptability.

While they naturally inhabit freshwater rivers, they have been shown to also survive in brackish water.

Fish-keepers even debate whether it is necessary to add salt to molly tanks, but the fish will thrive without extra salt.

Mollies are active feeders, and you will need a powerful filter to keep up with the mess they create.

It is quite easy to overfeed them since they typically eat more than they need to.

Give them meals they can consume in three to five minutes, and include flake foods, live and frozen food, and vegetables in their diet.

Change one-third of the water every week to keep the tank clean for your pets.

Mollies appreciate higher PH values from 7.5 to 8.5 and temperatures between 70 to 85ºF. These parameters should be kept stable to avoid stressing out the mollies. 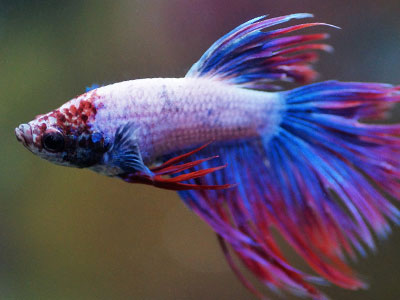 Bettas, also called Siamese fighting fish, are popular household pets. It is commonly thought that bettas can live in small bowls, but they need adequate space as much as any other fish.

Bettas have a lung-like organ that enables them to breathe air and therefore survive in environments with insufficient oxygen.

Keeping bettas in small compartments, however, leaves them vulnerable to the buildup of toxins.

Keep bettas in at least five gallons or even 10 gallons to ensure they are comfortable. You should also select a fine substrate since a sharp one can damage their bodies. The PH and temperature should be maintained between 6-8 and 75-80 °F.

You should be careful when keeping bettas in a community tank. Male bettas are particularly aggressive and territorial and should not be kept together.

Avoid fish with long-flowing tails such as guppies because bettas can mistake them for their kind. You can keep bettas with ghost shrimp, snails, black tetras, and catfish. 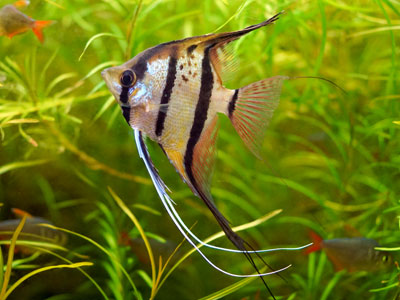 The freshwater angelfish is a type of cichlid indigenous to South America.

Their fins have a unique wing-like shape that has earned them their name. Angelfish are also popular for their graceful swimming behavior.

The fish can grow quite large, and you will require at least 20 gallons to keep two of them.

The tank’s current should be gentle, and you should organize driftwood and plants vertically to resemble downed trees.

Look for plants with broad and wide leaves like the Amazon Sword. A fine and soft substrate is preferable because the fish can harm their bodies on coarse bottoms.

Ensure that the fish are exposed to 8 to 12 hours of sunlight, and invest in the kinds that mimic natural sunlight.

In the wild, angelfish sustain their omnivorous diet by foraging for small crustaceans and worms.

You can allocate them pellets, flakes, and granules that are rich in protein and supplement with frozen and live foods.

While angelfish are fairly peaceful, do not keep them with smaller fish that can fit in their mouths. 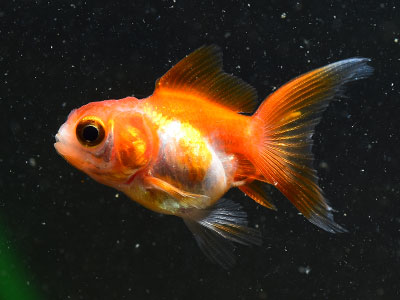 Goldfish make excellent beginner pets for the home primarily because they are readily available.

While they are commonly kept in small bowls, you will have a hard time maintaining the water quality.

The design of small bowls also discourages sufficient aeration, which can be detrimental to the health of your aquatic pet.

The tank requirements will also depend on the kind of Goldfish you get. While most people think about Goldfish, they mostly think of Fancy Goldfish with their vivid colors.

The food that you feed your Goldfish should have lesser proteins and more carbohydrates. It is better to feed the pet flakes and pellets formulated purposefully for them.

Goldfish will also welcome boiled vegetables like zucchini and peas. 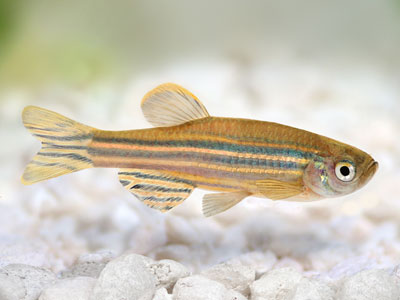 Zebra fish grow to only two inches, and their hardiness makes them a staple in home aquariums. Invest in a 10-gallon tank for a dozen of the fish since they thrive in large schools.

You should, however, expect a level of territorialism from the males during breeding.

Zebra fish prefer neutral to alkaline water, and you should maintain the PH between 5.0 to 7.0 and temperatures from 65 to 77 °F.

The fish will feel more comfortable if you provide a large open area for swimming, although you should still invest in small areas of vegetation along the bottom.

Zebra fish will feed on smaller fish and their offspring as well. 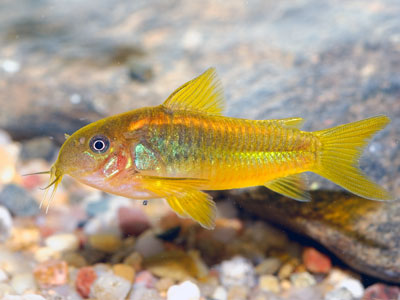 There are more than 170 described species of this fish, which is a lot of variety for any fish keeper.

Their bodies are armored with a forked tail fin and a flat underside.

The three pairs of barbels on the animal’s face are useful in detecting food in the sand. You can use a sand substrate in your tank or rounded gravel.

Cory catfish commonly range between 1.5 to 2.5 inches in size, and they, therefore, do not demand a large tank.

An aquarium size of 20 gallons is ideal for five of them.

The fish also love a water flow and are often observed ‘dancing’ in places with a high current.

You should, however, break the flow in some areas with plants, rocks, and other decorations.

While breeding has made the fish hardy, it is still advisable to maintain the PH and temperatures between 6.0 to 8.0 and 70-80ºF, respectively. 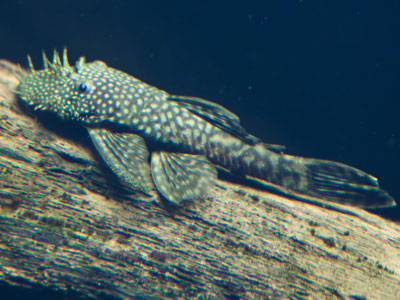 The bristlenose pleco is easy to care for and is particularly ideal for beginners. It is widely distributed in the Amazon River Basins and other rivers in South America.

The pleco’s fat and flat body is covered in bony plates, and it is mainly available in neutral colors like olive, grey, and brown.

While the fish is generally peaceful, it can use its armor to defend itself if it is attacked, so it is best to avoid keeping it with aggressive fish.

The bristlenose is especially a good candidate if you want an active algae-eater. The fish will eat large amounts of algae and keep your setup clean. 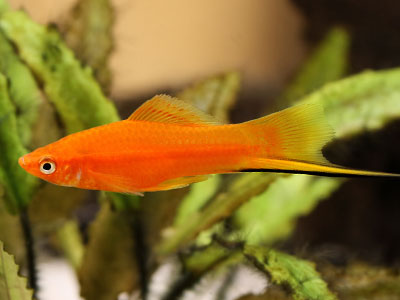 The Swordtail fish are coveted for their variety of colors and their uniquely-shaped fins.

There are many varieties of this fish to choose from since they continue to be selectively bred.

You should allow at least 15 gallons for every swordtail fish since they are active swimmers.

Cover your tank since it is common for swordtails to jump to their deaths from aquariums.

Ensure that temperatures and PH do not advance beyond the ranges of 65-82ºF and 7.0-8.4, respectively. 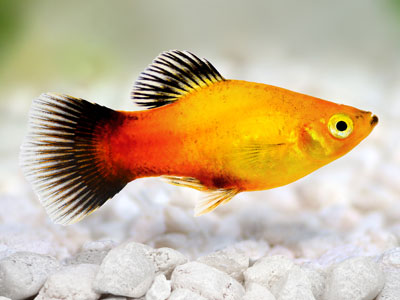 The bright coloration of platies makes them ideal fish for lively community tanks. While there are endless platy varieties, the most common species are Variatus Platy and Southern Platy.

Many hybrids have been cross-bred from these two species to create more variations in appearance.

Platies feel comfortable in a planted tank and a gravel substrate. The plants can include duckweed and Java Moss, which can be arranged according to the specific kind of fish species.

The colors of platy fish are more vivid in cooler water, while the PH should be range from 6.8 to 8. 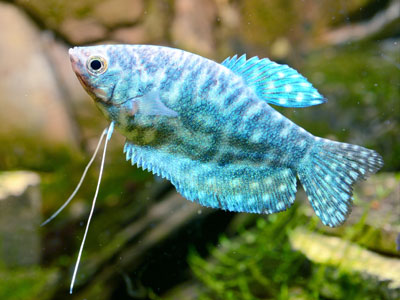 Gouramis have their natural habitats in eastern and southern Asia, where they inhabit slow-moving rivers, canals, and swamps.

The tank requirements vary from species to species, although a 30-gallon tank will suit most species.

Dwarf gouramis will be happy in smaller tanks of even 10 gallons. Since gouramis are top-dwellers, invest in floating plants to provide them with spaces to hide.

The fish will reveal their true colors when they feel very comfortable.

When keeping gouramis in the same tank, keep in mind that the males can get aggressive with one another. 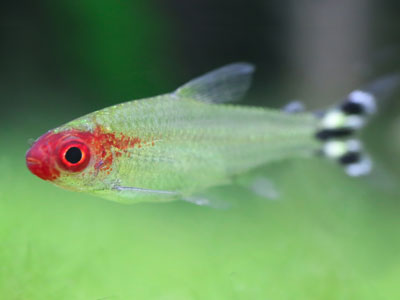 Rummy nose tetras have attractive bodies consisting of different colors and patterns. There are three species that are considered as rummy nose tetras, all of which inhabit the Amazon River.

To mimic the natural habitat of the tetra, get a fine-grained substrate like gravel and mid-level plants. To keep the temperatures between 75 to 84 °F, invest in an efficient heater.

An external filter will also be necessary because the fish are especially sensitive to the presence of ammonia and nitrates.

It is advisable to keep rummy nose tetras in a school of at least 10 of them, which means that you will require a 20-gallon aquarium. 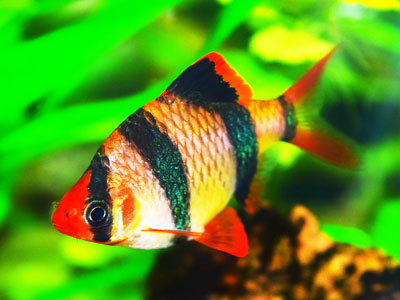 Tiger barbs are mostly recognizable for the black stripes that wrap across their silver/gold bodies.

Despite being small, tiger barbs are incredibly active, and you should allow for 30 gallons at the minimum.

The fish will thrive in schools of at least 5 or 6, not only to make them comfortable but to reduce the chances of nipping at the fins of other species.

Tiger barbs are known to be semi-aggressive, and they can nip the fins of slower fish if kept in community aquariums. 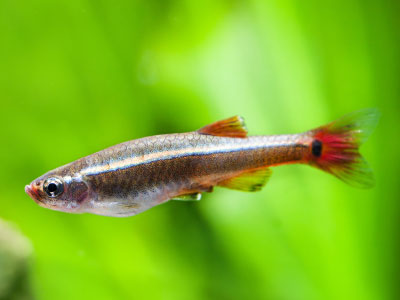 White cloud minnows are small and colorful fish that are perfect for community tanks thanks to their peaceful temperament.

Their true colors are revealed when they are in schools or at least six or more.

They are popularly coupled with Goldfish because the two species thrive in colder water.

The minnows are also known to display their full, vibrant colors when the temperature is kept between 64 to 72 °F. A dark substrate is preferable because it will contrast well with their lively hues.

Allow for plenty of vegetation as well as rocks and driftwood. The minnows also appreciate open areas for swimming.

If you want to venture into fish-keeping, you will be spoilt for choice as there are plenty of freshwater fish that complement home aquariums.

Most people seem to prefer brightly-colored pets like tetras, guppies, Goldfish, and mollies since they create a beautiful setup.

While considering community tanks, keep fish that have similar tank requirements together to ensure they are all comfortable. 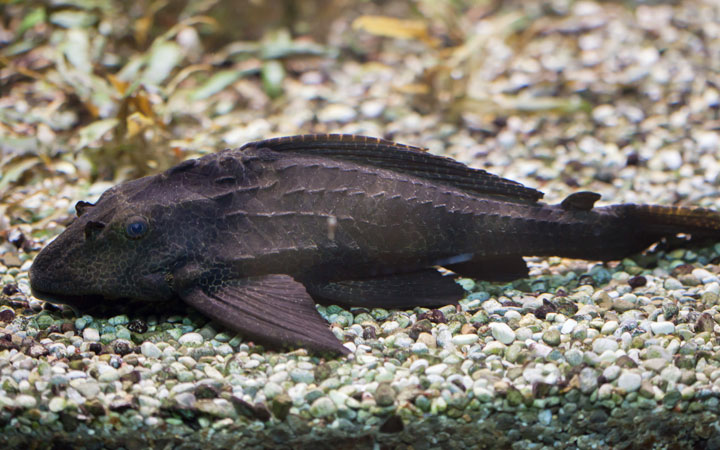 What is the Best Substrate for Pleco Fish? 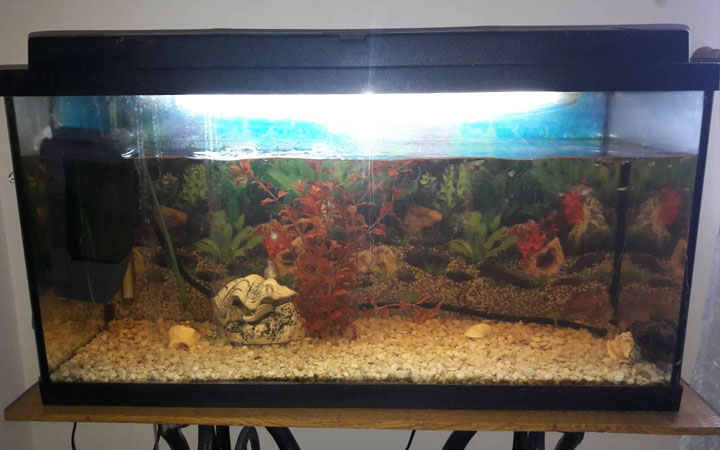 How to Repair  a Leaking Glass Aquarium? 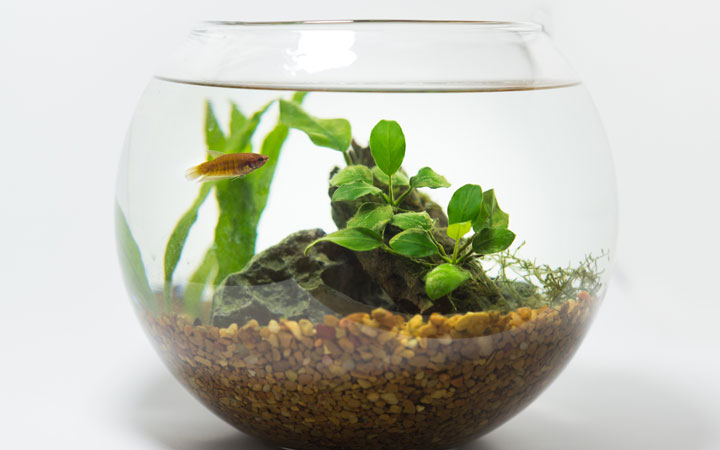 How to Setup a Planted Fish Bowl? 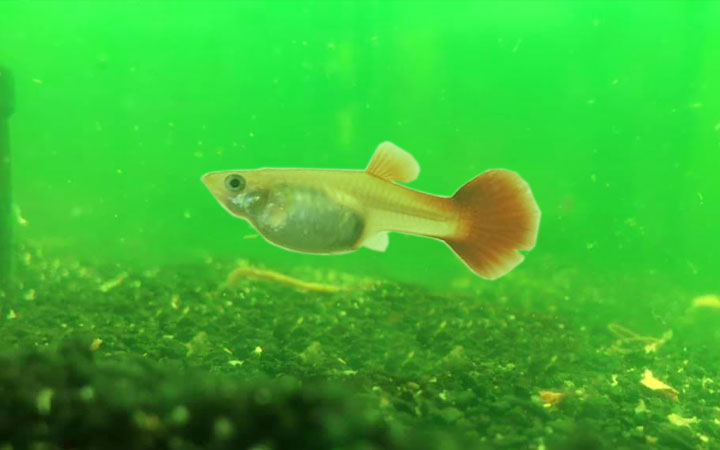