Dragon goby is a unique fish that is becoming popular among beginner and veteran aquarists. It is also popularly known as violet goby, due to its purple color, dragon fish or dragon eel. Their care level is moderate, thus not suitable for hobbyists who have no prior knowledge in fish keeping. 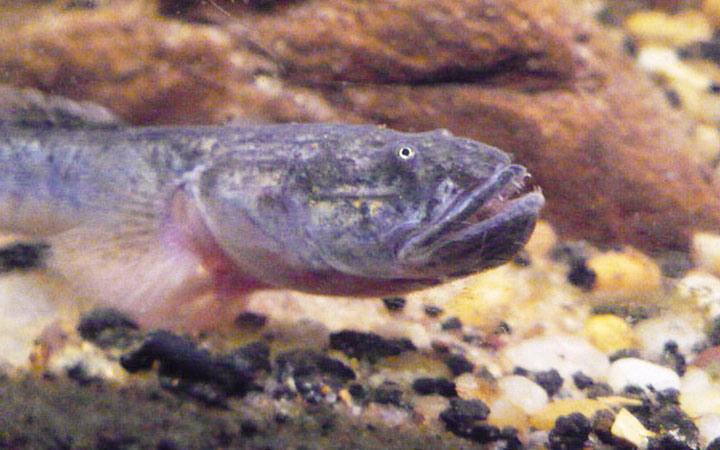 The dragon goby is long and slender; it has a body that resembles that of an eel. They have a muscly body that has light violet shade and shimmering gold bands along the length of their backbone.

Dragon gobies are not easily bred in captivity. Most of their species sold in pet stores are captured from the estuaries of the Gulf of Mexico or near the Atlantic coast.

Dragon gobies can survive in freshwater, however, after a few weeks, they will start displaying symptoms of stress if not placed back in brackish water. When kept in favorable conditions with a healthy diet, they can live for more than 10 years 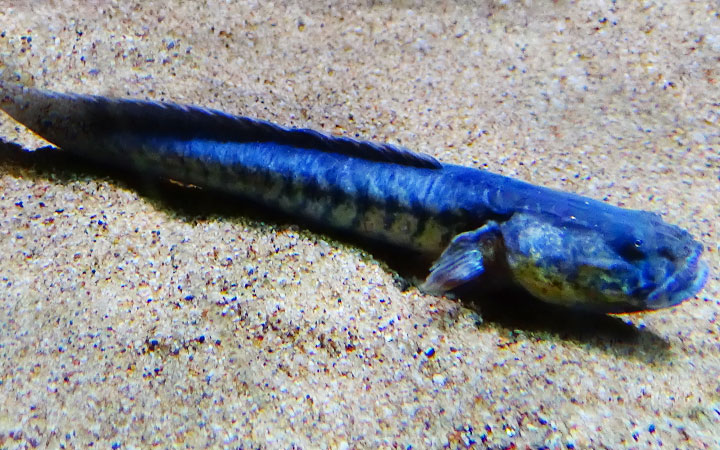 Dragon goby, or Gobioides broussonnetii, belong to the Gobiidae family. In the wild, dragon gobies prefer marine, fresh and brackish water. They are natively found in swampy waters around the Gulf of Mexico, Florida, and waters near the Atlantic coast of North and South America.

Dragon gobies prefer river mouths, estuaries, and bays that have muddy substrates at the bottom. Whereas most gobies are small and only grow up to approximately 4 inches, dragon gobies are long and can grow up to 24 inches while in the wild. However, in captivity they rarely grow past 15 inches.

Dragon goby are unique types of fish. They, therefore, need a specialized tank, otherwise, they will die when kept in a standard aquarium. They need a lot of space; they do not thrive in small spaces since they can grow up to 24 inches long.

Because dragon goby grow to a really large size, the minimum tank size should be 50 gallons. For any additional goby, consider an extra 25 gallon.

Dragon gobies are very territorial, especially when living with other dragon gobies, therefore a much bigger tank is needed when you keep more than one dragon goby in the same tank.

The aquarium should also be at least 4 feet long if you are keeping one dragon goby and around 6 feet for a pair of them.

Dragon guppies spend most of their time hiding in the mud, hence the aquarium should have a thick layer, at least 3 inches thick, of sand or silt at the bottom.

Avoid adding rocks to an aquarium with dragon goby. This is because rocks can cause injuries to the dragon goby’s fins that can lead to infection or in severe cases ultimately lead to death.

Plants that you can add to an aquarium with a dragon goby include Java Moss, Java Fern, Hairgrass, Anubias, or Marimo Balls.

Remember, dragon gobies love to dig, therefore, the plants should be securely fixed to prevent possible uprooting or from damage by the fish.

Dragon goby need a moderate care level. They have water parameter requirements that must be observed, otherwise, the fish may become sick and die. In the wild, they live in marine brackish water.

This should also be replicated in the aquarium. Dragon goby prefer water temperatures of around 77 to 82 degrees Fahrenheit, a PH level of 6.5 to 8.5, and salinity at 1.006–1.008. Dragon goby is very sensitive to Ammonia.

Ammonia causes the fish to crawl to the bottom of the aquarium and gasp for air. Ammonia levels should, therefore, be kept at low levels. If not watered down fast, it can lead to the death of your dragon goby.

Dragon goby also requires very clean water. This is to ensure the water is not contaminated with impurities such as Ammonia and other gases.

Water changes should happen every two weeks, with at least 10 to 15 percent water change. It is also important to have a water filter, thermometer, and water heater in your aquarium to ensure your finned friend is always comfortable.

Dragon goby are omnivorous. They have very small eyes and are primarily scavengers. In the wild, they use their big mouth to scoop mouthfuls of substrate and gravel.

They sort through food, algae, and small organisms, then swallow food and spit out the other substrates. They also have very sharp teeth that they use to scrape algae from surfaces.

In an aquarium setting, dragon gobies will eat blood worms, frozen black tubifex, algae wafers, and flake food. Despite their big mouth, they have small throats, therefore, whatever you feed them should be very small.

Feed your dragon goby once in a day. Feed them enough food that they will consume and finish within two minutes. Any excess food will turn into waste that pollutes the water.

It is important to note; your dragon goby may not eat in the first one or two days after bringing it home. It will need time to be adjusted to its new environment.

Dragon goby are nocturnal type of fish and very shy. They are mostly active at night, therefore prefer being fed at night. However, they adapt to feeding during the day after a few days.

Many people assume dragon goby is fierce due to their fierce looks, big mouth, and many teeth. Because, they are non-aggressive, dragon gobies can easily become victims of bullying if kept together with aggressive fish, such as tiger barbs and Oscars.

Dragon goby can, on the other hand, eat small fish. However, if they are well fed, they will not bother and can comfortably live with them.

The best tank mates for a dragon goby are any medium-sized, peaceful, and brackish water-tolerant fish. Some of their best companions include, glass fish, guppies, swordfish, mollies, platies, knight gobies, bumblebee goby, and Celebes rainbowfish.

Before picking a tank mate for your dragon goby, check for compatibility in temperature levels, SG requirements, size, and temperate.

Dragon gobies have small eyes and are virtually blind. They rely more on their sense of smell to get food rather than sight. This makes it hard for them to compete for food in a community tank.

Therefore, it is important to make sure they get food, especially in a community tank.

Remember dragon gobies are highly territorial. Keeping them in a very small tank will result in one of the fish acquiring the entire space and defending it fiercely.

You can also add other scavenger fish to help keep the tank cleaner and reduce the number of times you will need to clean the tank. Some of such fish include amano shrimp, ghost shrimp, and nerite snails.

Dragon gobies are susceptible, especially in a community tank, to many common aquarium diseases such as fin rot and columnaris. These infections are caused by bacteria and mainly affect the skin and fins of the fish.

However, the bacterial infections are treatable with antibacterial or antibiotic prescriptions. The key to keep your fish healthy in a community tank is to maintain a high level of cleanliness.

Breeding dragon gobies in captivity is not easy. As a result, many, many dragon gobies sold in pet stores are captured from their natural habitat. Breeding them successfully, you will require a large aquarium, with groups of 1:3 or more male is to female ratio.

In the aquarium you will need to add many hiding spots for the female. The male dragon goby will also need space to build their nests.

To trigger breeding, replicate their natural breeding conditions by feeding the gobies with high-quality live food, lower the salinity levels to get close to freshwater then raise the SG to replicate marine levels.

This shift is similar to what the dragon gobies experience in the estuaries and along the Atlantic bays.

After a few days, approximately one to two days, the eggs hatch into small fry. The fry will require a special diet, such as green water, for close to a month or until they are old enough to eat brine shrimp.

Differentiating male dragon gobies from their female counterparts is hard. There are no external features that differentiate them.

Does Dragon Goby Jump Out of Tank?

Yes, dragon gobbies are really good fugitives and they often try to jump out of the tank, especially if water parameters are not very good. So keeping a lid on your tank is crucial, in order to prevent them from jumping out.

No, dragon gobies are not aggressive. Although they look very fearful, they won’t attack other fish. They are very territorial with their own species, but they will not kill each other, just chase other dragon gobies away.

Can You Keep Two Dragon Gobies Together?

Yes, you can keep two ore more dragon goby fish together, but as I mentioned before, you need to consider a large tank for them. A single dragon goby needs at least a 50 gallon tank, and for any additional goby fish, you need to have extra 25 gallon to give them enough space.

Also, consider adding hiding spaces, so each of your dragon goby fish will have its own cave to rest and hide.

Gobies in general are very adaptive fish species, therefore can live in a wide range of conditions. Dragon gobies live in brackish water, however they can also live in freshwater if they are slowly acclimated.

You should note, though, that dragon goby can develop diseases if they are kept in freshwater for extended period of time. So it is much better to keep them in brackish water.

Dragon goby is slowly becoming popular in the aquarium trade. Although their care level is moderate, beginner aquarists can easily learn to care for them and keep them comfortable.

Dragon gobies have peaceful and shy temperament. This makes them ideal for community tanks with other medium-sized and peaceful fish.