The lava snail (Faunus Ater), commonly called the black devil snail, is an interesting aquarium snail. It is not as popular in the aquarium trade as other snails, but it is incredibly easy to care for. 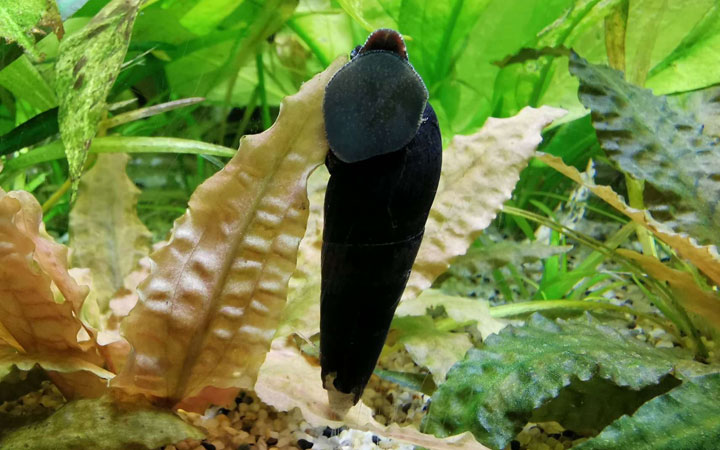 This Asian snail species is a local delicacy in countries like the Philippines, where it is savored for its diabolical aroma.

Lava snails are incredibly hardy, and they actively move around an aquarium looking for food. Read on to discover more about this underrated aquarium snail:

The name black devil snail is an ode to its black shell, which can sometimes take on a rich chocolate hue.

Some pet stores will sell lava snails with gradient shells from brown to orange or white. Since not much ecology is known about the snail, there is often some confusion as to whether these “Cappuccino” varieties are Faunus Ater.

The genus Faunus comprises a single species that does not have color morphs. It remains unclear whether the colorful snails belong to another species of the genus or they are actually Faunus Ater.

Lava snails are often mistaken for Sulawesi snails, as both of them have elongated shells. The shell on the lava snail comprises several whorls which taper towards the aperture side.

The snail has a thick black operculum that falls off when it dies. The shell reaches 2-2.5 inches in length on average, but it can grow to 3.5 inches. 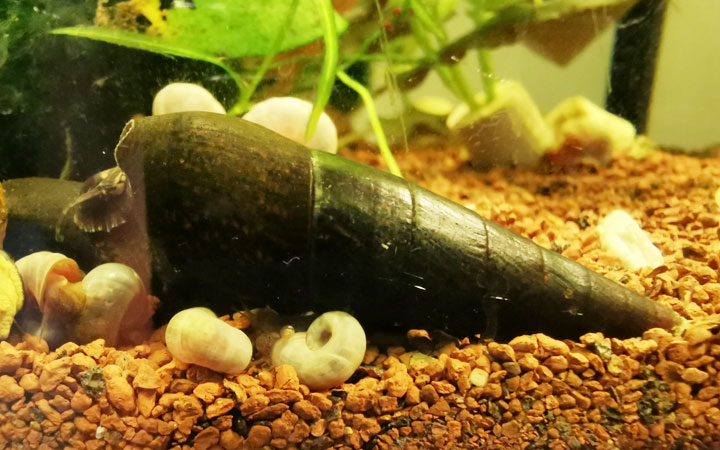 In the wild, lava snails inhabit both freshwater and brackish water habitats. You can replicate their native habitat in your aquarium with the following requirements:

Black devil snails grow to a maximum length of 3.5 inches, and they will need ample space to move around. Keep them in a minimum of 10 gallons.

Lava snails are a burrowing species, and you should not use pebbles or coarse gravel on the tank’s bottom. Use a sand substrate or soil with a little gravel.

Black devil snails can eat live plants, but they will leave them alone if they are well fed. You can provide vegetables and leaf litter to distract them from your plants. The snails dump their waste in the substrate, which can be additional fertilizer for the live plants.

Lava snails prefer diffused lighting, and you should consider keeping floating plants. Use rocks and decorations to provide hiding spaces for them.

Wild lava snails are adapted to tropical conditions. Invest in a reliable heater to maintain temperatures between 71-82 °F. Keeping them at low temperatures will slow down their metabolism and make them lethargic and inactive.

The tank’s water should be hard, with the PH between 7.0-8.0. PH levels are essential because their shells deteriorate in low PH.

If the shell starts cracking and eroding, it will be time to increase the PH. Lava snails are also tolerant of saline conditions and you can keep them with brackish species like bumblebee gobies.

The tank should be well aerated and filtered, and you should schedule regular water changes. Siphon the substrate consistently to remove the snail’s waste. You should also acclimatize the lava snail as you would with any invertebrate.

Lava snails are omnivores and skilled scavengers. They will feed on any algae in the substrate and on decorations, but they are too heavy to climb on the aquarium glass. They will also gladly eat any leftover fish food.

Supplement the foraged food with algae wafers, carnivore pellets, crushed flakes, and fish pellets. The meals should sink because they are bottom feeders.

Provide blanched vegetables like spinach and cucumber, and include calcium supplements to preserve their shells.

When compared to other aquarium snails, the lava snail is quite fast. They are more active than Sulawesi snails, and they spend a lot of time in search of food.

Their thick shells protect them from bullying tankmates like puffers, but you should avoid active predators.

Avoid crabs and crayfish as they can destroy the shells on the lava snail. The snail’s antenna is thin and small, and it can be damaged by notorious fin nippers.

You can keep them with many kinds of shrimps, including cherry shrimp, amano shrimp, ghost shrimp, and bamboo shrimp.

There have been no successful attempts to breed the lava snail in the aquarium (as far as I know). The little information there is on breeding the snails suggests that they are oviparous.

It is thought that the breeding process includes a long free-swimming larval stage, after which the larvae develop in brackish water.

The lava snail, or black devil snail, is perfect for aquarists who want tank cleaners that will not overpopulate their aquariums.

The snail does not reproduce in freshwater, and it is almost impossible to breed them in tanks. Lava snails are however fascinating additions to peaceful community aquariums. 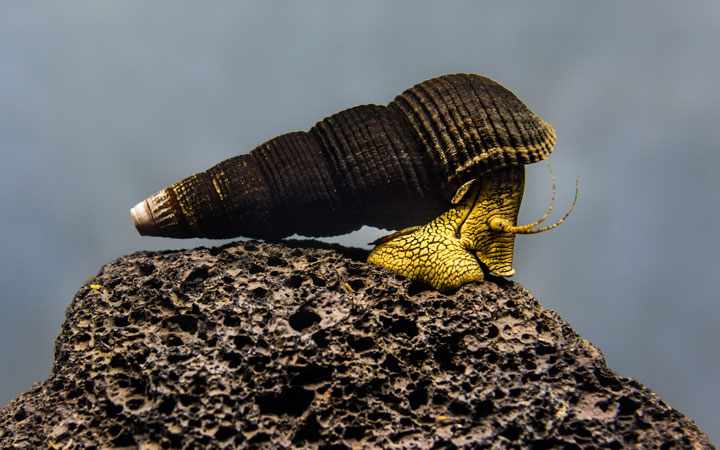 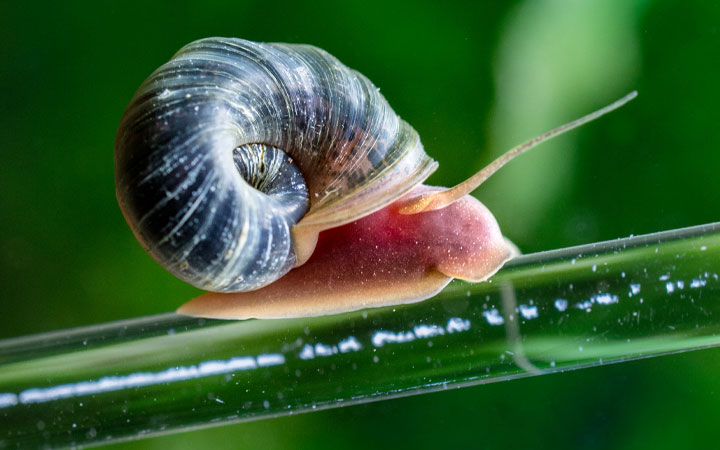