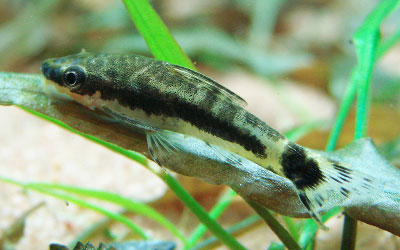 Otocinclus catfish is also known as dwarf fish, Oto Catfish or simply referred to as otos. They are smaller but excellent algae eaters in an aquarium. When placed in the same tank with Cardina japonica shrimp, otocinclus play a significant role in keeping the tank clean and tidy.

Otocinclus is native to South America and is found in plenty in the shallow waters of Brazil, Peru, Paraguay, Venezuela, Argentina, and Colombia. Currently, there are 19 known different species within this genus. Each species is distinguishable by looking at their color. However, some of the commonly found otocinclus catfish in aquariums include the following:

In general, the entire body structure of otocinclus catfish is elongated but widens in the middle and narrows towards the tail and the head. These fish are vertebrates, meaning that their body structure is made up of a row of bones. The fish can grow to about 5 centimeters and they have a lifespan of 3 to 5 years. Also, the otocinclus catfish have a tough cup-like shaped mouth and transparent fins that make them unique among other tank fish.

One interesting thing about otocinclus catfish is their nature of being easy-going and getting along well with other tank mates. Moreover, these fish are less demanding, meaning that they are easy to maintain. Even beginners can have an easy time with them.

Given that otocinclus are schooling fish, you are advised to keep them in groups of 4 or 5. These fish are bottom dwellers but they occasionally swim to the surface in order to get some atmospheric oxygen to supplement the dissolved oxygen in the water. This behavior should trigger you to check all tank conditions and correct those that are not favorable for the survival of your otocinclus catfish.

Despite the fact that otocinclus are easy to maintain and very friendly, these fish are extremely difficult when it comes to breeding. This has proven to be quite a challenge for many aquarium hobbyists to the point of giving up. But if you wish to give it a second thought, here is what you are supposed to know:

How to Breed Otocinclus Catfish?

In order to breed otocinclus catfish, there are few things to consider. Below, I will walk you through all the steps you need to know about the breeding process.

Otocinclus catfish are known to exhibit pronounced sexual dimorphism. This means females become larger and grow wider upon reaching the reproductive age. Also, you can easily distinguish them by just at their sex organs. Females and males have their sex organs shaped differently and their shape, size and color are also different. When compared to males, females seem to be larger and more vibrant.

Male otocinclus catfish have genital papilla with rows of modified denticles (also known as odontoids). All these organs can be seen at the bottom side of otocinclus catfish tail system. This is the location where the body becomes a tail that is specifically twisted.

Even though the role of the modified odontoids is not yet clear, experts are of the opinion that it takes part in copulation. In addition, this organ is meant for the otocinclus male fish orientation during the breeding process.

Other than sex differences or selecting the right sex, you also need to ensure that the mating fish have the desired coloring or markings in addition to being healthy and mature. Most importantly, the mating fish should be compatible so that the whole breeding process becomes successful. Given that otocinclus catfish do not mate that easily, you will have to keep a close eye on their ability to display courting behavior before taking further steps.

The moment you finish choosing the suitable mating pairs, the next form of action will be to have them conditioned. This conditioning process means that you should start feeding your fish different types of foods in preparation for breeding. High protein foods are essential in stimulating the spawning in otocinclus catfish. Examples of foods that contain high proteins include live foods such as brine shrimp, daphnia and also algae wafers.

Breeding otocinclus catfish is not an easy task. As such, tank conditions, the size, spawning behavior, and breeding environment are essential if you want to have a successful breeding. The breeding tank, however, should have all the right conditions for the fish to mate and reproduce without anything hindering them. That is why water parameters like the temperature, pH, and hardness need to be at the optimum levels for the otocinclus catfish to breed properly.

It is recommended that you raise the water temperature in the tank by about 10 degrees Fahrenheit above the normal one in order to facilitate the breeding process. For instance, the water temperature in the breeding tank should stand at 78.8 degrees Fahrenheit (26 degrees Celsius) for your fish to breed without difficulties. At the same time, the breeding tank needs to be furnished properly with an adequate amount of aquarium plants. The plants will play a critical role in holding the clusters of eggs in place after they have been laid.

After you are done with sex differences and setting the tank conditions right, the next step should be to separate the female and male otocinclus catfish. Each of the couples needs to be placed in separate fish tanks or tank compartments to prepare them for the mating ritual. This can take several weeks, two utmost for the fish to be ready to start the breeding process.

After a period of one week has elapsed, you can bring your male and female otocinclus catfish in the same tank to initiate the spawning. If you are lucky enough to witness this mating ritual, you will definitely see the female otocinclus swimming up and down rocks, tank plants, or the sides of the aquarium with their male partners in hot pursuit (literary).

The chasing game will go on for a while before the male catches up with the female to start the mating process. Both couples will assume a T-shaped position as an indication of mating whereby the female will release and hold onto her eggs using the ventral fins.

The female otocinclus will then swim towards the substrate or rather the spot where she lays the eggs while the male still follows her. This mating ritual does not stop there but continues for some time until the female lays all her eggs. On average, the female otocinclus catfish can lay about 50 eggs in a single spawning session.

Once the eggs have been laid, the male otocinclus goes ahead to fertilize them by releasing the sperm onto the laid eggs. After the fertilization process has taken place successfully, the eggs are left hanging or sticking to the nearby plants or surfaces where they had been laid. This is an interesting observation among the otocinclus catfish because they don’t display reputable parental care or instincts that are common in a number of different classes of tank fish.

If the fertilization process comes out to be successful, the hatching should follow suit. As a result, the eggs will hatch after a few days and sooner or later you will start seeing the fry swimming in the breeding tank while looking for food. Their favorite meal comprises of algae and other microbes present in the tank.

Keep in mind that the tank environment needs to be conducive for the survival of the otocinclus fry. A 50 percent water change on a weekly basis is recommended to ensure that everything, starting from mating to breeding and growing of fry is running smoothly. Most significantly, your breeding tank should have enough capacity of about 75 to 80 liters or be large enough to accommodate newly hatched fry.

Otocinclus catfish are reputed for their peaceful nature, easy of maintaining them and their vibrant appearance while in the tank. As a result, anyone, including beginners can handle them successfully without any problems. When it comes to breeding them, you need to be an expert to ensure that the whole process goes on successfully.

This is because otocinclus catfish are some of the few species of tank fish that are difficult to breed. But with the right knowledge and breeding facilities at your disposal, nothing should prevent you from achieving this feat.