10 Piranha Fish Types You Can Keep as Pets

Home » Piranhas » 10 Piranha Fish Types You Can Keep as Pets

Piranha fish are certainly among the most prominent fish on our planet, and the public has heard of them even among the most distant areas of the world. For many years, they were believed to be extremely aggressive and dangerous to humans. And this is in fact partly true, as they certainly have the jaw strength and the razor-sharp teeth to hurt us. 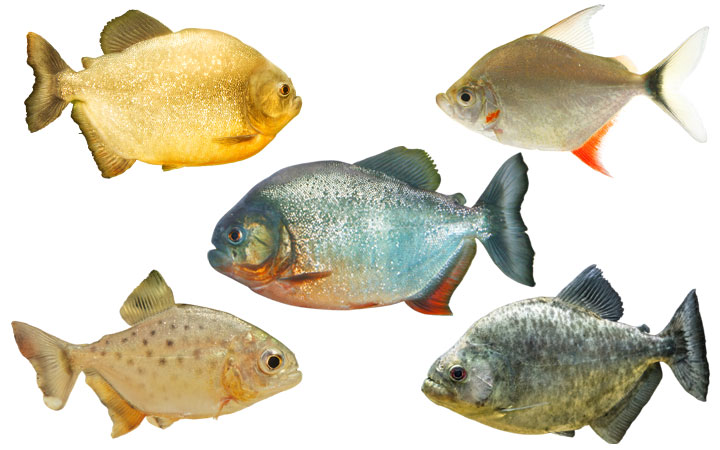 However, the rest is actually a misbelief. Indeed, piranhas are not that thirsty for human blood and they do not hunt in packs. In reality, they are schooling fish which will obviously attack if feeling threatened, but that is all. If you are looking to adopt a piranha, you should know that there are more types available.

Here are 10 piranha species that you can keep as pets in your fish tank: 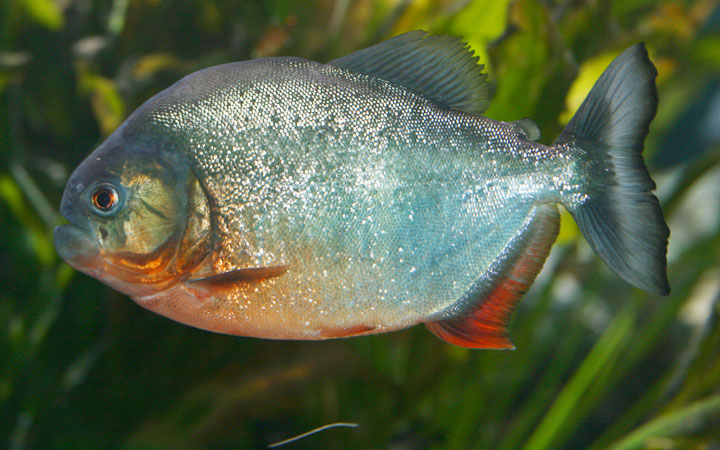 Let us begin with the most popular pet piranha ever: the red-bellied goddess. This aquatic monster with razor-sharp teeth has been one of the domesticated options for over 60 years now. And it is still not getting out of style.

They are typical schooling fish and need to be housed in groups in order to thrive. Therefore, please plan on providing your pets at least 100 gallons of water volume during their life in captivity. If you take good care of these fascinating creatures, you can expect them to stick around for 10 years. Some fish keepers, however, have reported their beloved pets to have survived for even 20 years. 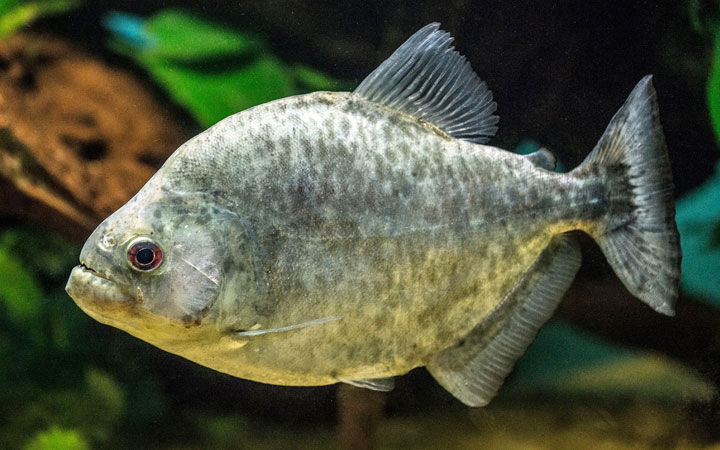 The redeye piranha is often referred to as the black piranha, but also as the white piranha. And no, it is not a mistake, but rather an indication of the various color morphs available. Indeed, their bodies are usually of a single, uniformed color, and this can be either almost black or more towards a silver variation. What they all have in common though is a pair of red eyes.

These spectacular creatures are also a quite common choice for massive home tanks. Even though they can reach a full body size of 17 inches, they can adapt perfectly to 75-gallon tanks for a simple reason: these fish like to live alone.

They usually survive around 8 years in captivity, and they should not be kept by completely inexperienced keepers. One of the main reasons for that is that these biting machines require extra care when handling, as they own the most powerful bite of them all. 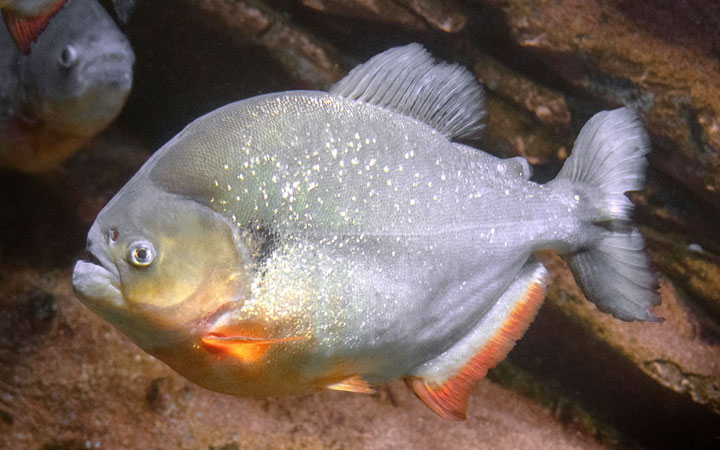 At first glance, the black spot piranha is identical as the red-bellied version. However, when looking closely, you will notice a bold black spot behind their heads, hence their name. Also, they are somehow smaller and rarely exceed 11 inches in full body length.

They are happiest when kept in schools of 5 or 6 specimens, so prepare yourself to setup a massive home for these creatures. Additionally, they tend to produce significant amounts of waste when compared to their size, so setting up a stronger filtration system is highly recommended.

Pike piranhas are one of those types which barely resemble to the standard piranha types we are used to. Indeed, their bodies are of a more elongated shape. Other than that, they have all the specifications which makes them a true piranha. Quite aggressive temperaments, extremely sharp sets of teeth, shimmering silver colors… these guys have it all.

Similar to redeye piranhas, these too should be kept as single pets inside a tank, as they seem to tolerate well neither their own species nor others. When kept as a pair in captivity tanks, they can actually decide to fight each other until one is left.

Even though they do not grow over 12 inches, they are overly active fish and need to be housed in huge tanks such as 120 gallons.

If you have the patience and devotion to actually find these rare piranha fish, you will get an utterly unique and odd-looking pet. They are extremely laterally compressed and feature therefore super-slim body shapes. On top of shimmering silvery bodies, they usually have a distinctive broad stripe starting from the mouth and ending towards the dorsal fin.

They usually grow around 12 inches and can live for over 10 years. This is one of the few types which can be successfully kept both as solitary specimens and as part of functional schools.

All you need to be careful about is providing them enough living space (130 gallons for single fish and 270 gallons for a group). Gery’s piranhas are carnivorous, and they love getting their dose of live prays.

For those who cannot afford the massive aquarium space, Sanchez’s piranha may present the perfect solution. Indeed, these particular fish are quite small when compared to most piranhas and can only grow around 6 inches when mature.

Moreover, they do not function well with other fish (or with their own kind), so you can healthily adopt just one fish and keep it into a 30-gallon tank.

They are remarkably similar to red-bellied piranhas at first glance, although they feature some extra black coloration on their tails.

The ruby red piranha is another relatively small piranha type and it can only grow up to 7 inches. Therefore, they may be housed in smaller tanks such as 20 or 30 gallons (if kept as individuals).

However, they are still a quite new pet species, so it is not fully clear until now whether they should be housed into groups or as solitary creatures. Those few attempts of schools did not end well.

They usually feature a pale yellowish or silver base color with vivid red splashes below their heads.

Big belly spine piranha fish are extremely rare in the aquarium hobby, so there is sadly not much known about these creatures.

They can grow up to a size of 10 inches and they feature red coloration on the bottom parts of their bodies. It is still to be fully researched whether they should be housed into groups or as solitary pets, but experts suggest keeping them as individuals for now.

This piranha species is a rare fish, not just in the aquarist hobby but also in the wild. Altuvei piranhas can grow around 8 inches only and they feature silverish solid bodies with typical red eyes.

They should be kept as solitary pets (if you manage to find them). 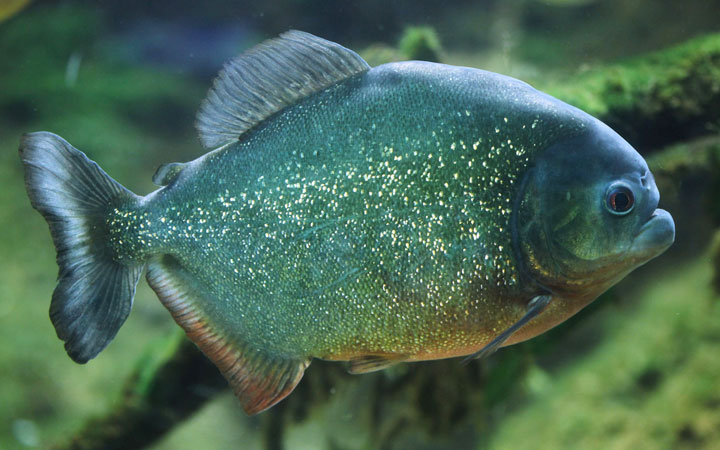 To conclude, we have saved the rarest privately kept piranha of them all: the blacktail beauty. This particular fish has a massive body and, even though it does not exceed 14 inches in length, it is terribly strong and heavy. They are super-easy to distinguish thanks to their half yellow and half grey bodies. With the tail, obviously, heading to a darker variation.

They are so rare because they require too massive tanks which are basically impossible to setup privately.

Piranha fanatics are well aware of the majestic predispositions of these fish, so seeing them more and more as wanted pets should not come as a surprise.

Fearless, potent, individualistic and intelligent, these aquatic creatures make one of the most eccentric and unrepeatable pets ever. Which one will you be bringing home? 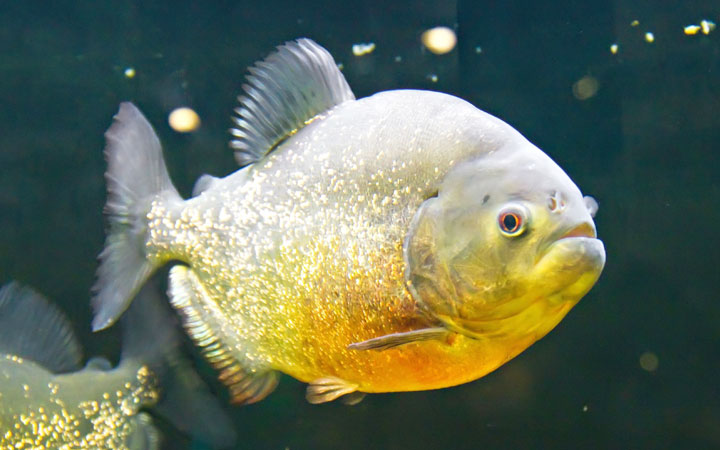 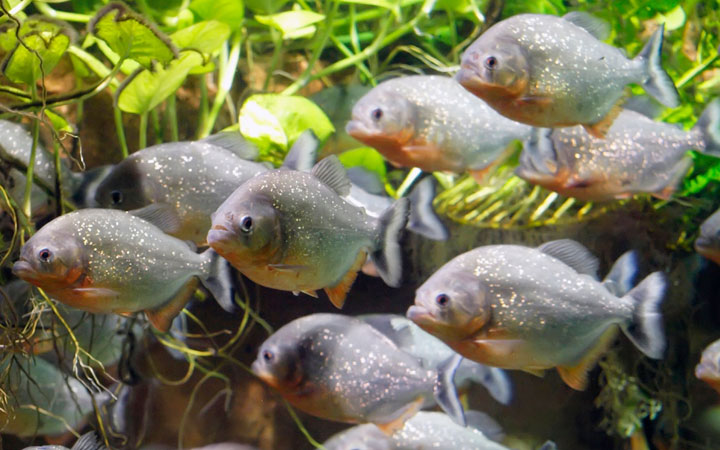 How Many Piranhas Should You Keep Together? 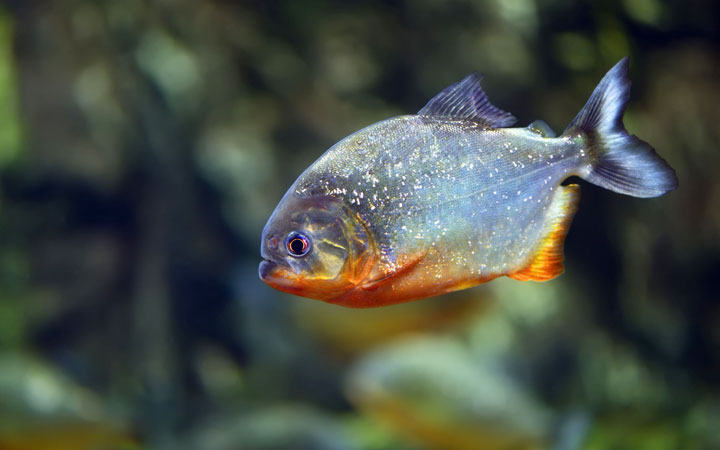 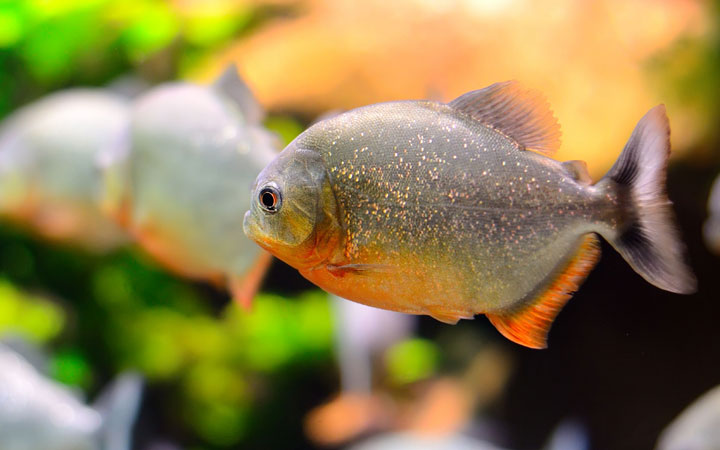