The silver arowana was first described in 1829 by the French zoologist Georges Cuvier. It is recognized among the few prehistoric bony-tongued fish that inhabit the fresh waters of the world.

Silver arowanas are larger than all other arowana species, which means that you will need a large set up for them.

This is also why they are more common in public aquariums and commercial fish tanks. They are better suited for an experienced aquarist as they require a lot of room, sufficient food, and specific requirements.

Silver arowanas are more affordable than other arowanas, and they are often the least controlled by import regulations.

Wild silver arowanas average at around 47 inches in length, although captive ones will reach 24 to 30 inches.

Its lithe body cuts through the water in a snake-like motion, and it is covered in thick scales with silvery and golden highlights. The scales will also reflect green, blue, and red tints as the fish grows older.

This fish has a bony tongue, and the mouth is positioned vertically at the top of its body. The mouth opens in three pieces, and when they bite, the teeth move up to the mouth’s roof. The arowana uses the two barbels at the lower jaw to sense for food.

The silver arowana hails from South America’s river basins, including the Amazon, Orinoco, Rupununi, and Essequibo river systems. Its populations have been recorded in Brazil, Peru, and French Guiana.

The fish lives in calm waters in floodplains and swamps since it is unable to maneuver through rapids. The arowana is a skilled predator, and they leap from the water to catch prey on low-hanging branches. They live in shallow waters and are spread over vast niches. 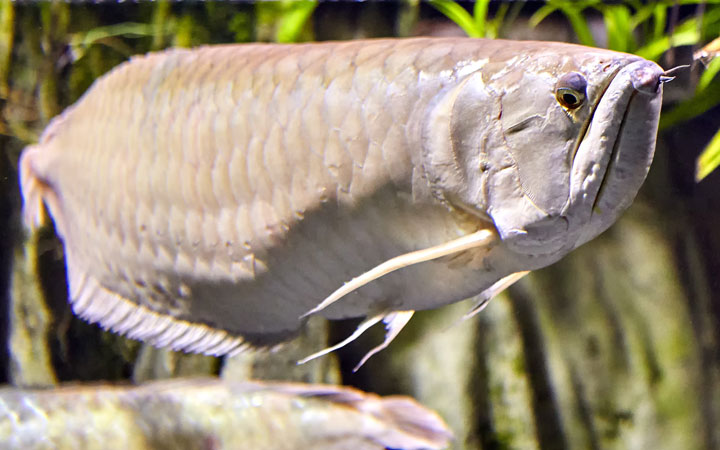 While you can keep young arowana in a 55-gallon aquarium, you will quickly need a larger tank as they grow bigger. Juveniles can gain as much as two inches every month in the first year. It will be more feasible to start them off in a large tank.

An adult will require at least 250 gallons to be comfortable. The tank’s length should be at least three times longer than the arowana’s length, while the width has to be more than 1.2 of the fish size.

Silver arowanas often surprise aquarists by breaking the aquarium glass. The fish are incredibly powerful, and you will need thick glass and a sturdy stand to contain them.

Keeping a silver arowana in a cramped space will leave them stressed, aggressive, and motivated to jump. Insufficient space will also result in deformities and reduced lifespan.

The fish will jump at any chance, as this is how they hunt for prey in the wild. Your aquarium must be covered with a tight-fitting lid that they cannot tip over.

The substrate choice is up to you, but the ideal one should highlight the colors of your arowana. You can use fine gravel to avoid injuring your fish.

If you want to keep a planted tank, use them sparingly and leave the middle part open. Silver arowanas appreciate a lot of open areas, and they can also uproot plants with weak root systems.

Floating plants can discourage the arowanas from jumping out of the tank, but that does not mean that they will not try.

You can also add driftwood, rocks, and other decorations for the arowanas to hide when they feel skittish. Avoid using any sharp ornaments in an arowana aquarium.

Silver arowanas will thrive under moderate aquarium lighting. You can use different LED lights to bring out the colors of your fish.

Do not turn on the lights suddenly as your fish will get spooked and try to jump. Expose the arowana to ambient room lights before switching on the aquarium lighting.

One common challenge with keeping silver arowanas is the amount of waste they produce. They are big fish with equally large appetites, and the water quality in the tank can quickly deteriorate.

Invest in an efficient filtration system with an emphasis on biological filtration. Canister and sump filters are the standard choices for large arowana tanks. Provide a calm current for the fish and promote aeration to boost the oxygen levels.

Silver arowanas will flourish in good water conditions, which means keeping the nitrite and ammonia levels at 0 ppm and nitrate levels below 20 ppm. Replace at least 25% of the water every week.

In the wild, the silver arowana lurks on the water’s surface, waiting for prey. In addition to fish, the arowana eats snails, frogs, insects, and crabs.

Arowanas can jump up to three meters from the water to catch prey from low-hanging branches, and bird and snake remnants have even been found in the arowana’s stomach.

You will need a meat-based diet to satiate the carnivorous instincts of this fish. Provide feeder fish, shrimp, crustaceans, krill, bloodworms, crabs, and earthworms. Be careful with feeder fish as they can introduce parasites and bacteria into your aquarium.

Some fish-keepers have experienced success with pellets, although this is not common. Most arowana keepers alternate live and frozen foods because feeding them on live meals alone can be expensive.

Young arowanas should be fed at least twice a day to keep up with their rapid growth rate. You can feed them once a day once their growth rate slows down. Feed them until they reject any more food, and remove uneaten meals to maintain the water quality.

Arowana’s food should float on the surface, as they are believed to develop drop-eye if they have to look to the bottom for food. You can also train the fish to feed on your fingers.

The silver arowana is primarily a solitary fish that does not even like the company of its species. While you can keep a group of young ones together, they will soon develop aggression towards each other as they grow. You would also need a huge aquarium to keep several of them into their adult size.

If you want to add a silver arowana to a community tank, remember that it is a predatory fish. They will bully and snack on most smaller creatures. Ideal tankmates will be larger fish that can’t be eaten and peaceful but slightly aggressive species.

Silver arowanas have been coupled with oscars, knife fish, parrot cichlids, angelfish, catfish, and green terrors. It is thought that the arowanas will develop drop-eye when paired with bottom dwellers like catfish and Plecostomus.

Silver arowanas take some time to get used to a new environment. They will get scared when they see traffic around the aquarium, and will quickly retreat underneath rocks and caves. Over time, however, the fish will warm up to their owner.

Arowanas rarely breed in home aquariums, mainly because of their size and their long courtship period. They are bred in extensive fish farms in South America, where the tropical temperatures contribute to success. Supplemental heating is required for the fish to mate successfully in North America.

You can start with six to ten young arowanas kept in outdoor ponds so that they grow up viewing each other as companions. It is vital to separate their territories with dividers to curb any aggression.

Provide a consistent diet of live prey to induce breeding, and abolish the dividers carefully. Observe them closely to ensure that they warm up to each other.

Arowanas court each other for one to two months. You can see them displaying their fins, circling, and nipping at one another. You want to increase the amount of food you offer at this time.

The female arowana releases eggs that are around 0.5 inches in size. The male fertilizes and scoops them into his mouth, where they will stay for 6-8 weeks.

He does not eat the eggs, but rather, holds them for protection. The female will launch attacks at the male, and it is best to remove her from the territory.

Since the male holds the eggs for 6-8 weeks, he must have sufficient fat reserves to see him through. You should feed him adequately during the courtship period.

Young arowanas are around 2 inches when they hatch, and they congregate around their father for at least four months as their yolk sac is absorbed. Provide small prey like guppies for the young ones.

Many aquarists covet the silver arowana for its striking looks and unique personality.

This fish should, however, be left to experienced fish-keepers, as most people buy the arowana without the facilities to accommodate its giant adult size.

You will need 300 gallons to keep a single arowana, as keeping them in inadequate space will cause deformities. 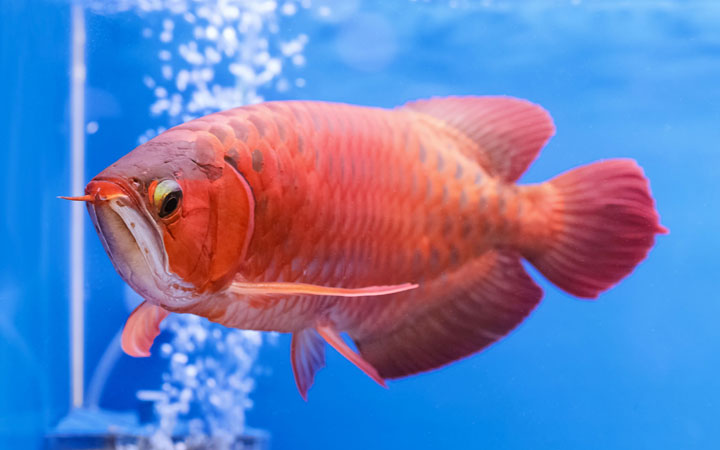