Until recently, fish from the Horabagrus species were quite hard to find in shops. Even so, this has thankfully changed with the sun catfish now being among the most popular fish for aquarists at pet stores. 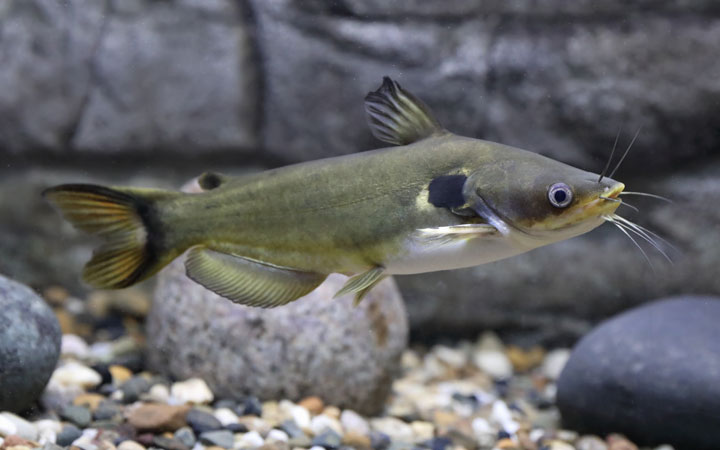 The scientific name for this fish is the Horabagrus Brachysoma. It is also called the Gunther’s or yellow catfish or the gold spotted Thai cat. The fish was described by Gunther in 1864. Its species was named Hora after a famous ichthyologist who worked with most freshwater species in India.

This fish has a large head that matches its equally large eyes and four barb pairs positioned on the corners of its mouth and the under and upper tips. The sun catfish’s body is yellow with one large black spot around its pectoral fin.

Most people think that the fish grows to adult lengths of 13cm. This is however untrue because it reaches up to 45cm in its natural habitat and 30cm (12 inches) in an aquarium.

Moreover, the fish has a black mark extending over its body’s top. This gives an impression of a fish wearing a collar. Be careful when buying your pet fish to ensure you get the right one from the species.

The following are tidbits that you will find beneficial when keeping a sun catfish in your tank.

The sun catfish is a native of the Southwestern Indian state of Kerala where it dwells in the backwaters of the Chalakudy and Periyar rivers and Vembanad Lake.

It is also found in swamps and boggy pools in this area and the Malabar area. The fish prefers thick plantations in areas with slow-flowing waters. These are often low-land sections of the water bodies with muddy and sandy bottoms.

In the wild, the sun catfish preys on fish, mussels and insects. Some of the adult fish even eat frogs and ground insects. This flexible diet is quite convenient for the fish because the food availability in their natural environments is dependent on the monsoon rains.

The catfish is gluttonous when spawning and during the months after the monsoon rains but can survive on little food outside these periods.

As a nocturnal species, your tank should have dim lights and plenty of hiding places for the sun catfish to remain comfortable. This can be in the form of beech branch tangles, thick plastic pipes, large rocks and big bogwood chunks.

The sun catfish produces considerable nitrogenous waste amounts owing to its large size. To keep your water clean, you should have an external filter. When including decoration in your fish tank, ensure that it is either too heavy for the catfish to move or is secured to the tank’s bottom.

This is particularly important if the decor is in the bottom and mid-point of your tank since this is where the fish will spend most of their time.

Tanks hosting the sun catfish do not need gravel bottoms. If you, however, choose to include gravel in your aquarium, keep it under a quarter-inch thick.

Anything thicker than this will often fill with leftover food that, in turn, contaminates the water. A soft sand bottom is nonetheless the best choice for the sun catfish to protect its delicate barbels.

The sun catfish is quite hardy and can live in a broad range of water conditions. Even so, if you do not get the conditions right, your fish will often not thrive. The following are the conditions that you should aim for in your fish tank:

It would also be best if you kept an eye on the nitrate, nitrite and ammonia levels in your water. Deranged levels of the same can cause grave issues in your sun catfish. Change approximately 25% of the water in your aquarium every 2-4 weeks to keep it fresh and healthy for your fish.

In captivity, the sun catfish will feed on all prepared, frozen and live foods. You should, however, ensure you vary its diet to keep the fish healthy and interested in feeding.

Being a predator fish, this catfish will prefer feeding on live fish. Even so, this is not a must for your fish since it can eat other foods. You can substitute the live fish with a meaty frozen diet.

You should also include dried pellets, earthworms, frozen prawns and mussels in the sun catfish’s diet. This is in addition to plant matter, invertebrates and smaller fish.

Though there are several fish feed brands for your sun catfish, settle on premium brands. Though expensive, these brands contain all the essential nutrients that your fish will need and have no indigestible fillers.

The sun catfish is thankfully, not a fussy eater, and its feeding will be a breeze. Feeding it once or twice daily will suffice for a healthy pet.

Only give your fish what it can finish to avoid leftovers that will contaminate your aquarium’s water. You should also try to feed the fish just before darkness sinks in because this is when it is most active.

The sun catfish is peaceful for its size but will eat any fish that can fit in its mouth. Your best bet is keeping it in the same tank as large placid fish.

The ideal choices, in this case, include large characins, arowanas, cyprinids, and other catfish species. Fish from the Cichla, Polypterus and Datnioides species will also make suitable tank mates for the sun catfish.

The sun catfish is naturally gregarious. It thus is best to keep it in a tank with at least five specimens for its wellbeing. The tank mates you choose should be the same size as the catfish and introduced at the same time.

Keeping several sun catfish in your tank will make them more outgoing and active compared to keeping one.

Your sun catfish will live for 8-12 years. It is unfortunately quite difficult to breed the sun catfish in an aquarium just like other freshwater species.  This is because most aquariums are not large enough to allow the catfishes to reach their sexual maturity.

You should ideally have a tank capacity of about 200 gallons for a sun catfish to reach its sexual maturity growth level. This is almost impossible for a hobby aquarist to manage and there have been no documented cases of successful breeding among hobby aquarists.

You can source bred sun catfish from expert aquarists and fish farms for your aquarium. In the wild, the fish are egg-laying. The female will lay the eggs while the male fertilizes them. The females have soft, large distended stomachs while the males have reddish vents to distinguish them.

Nowadays, sun catfishes are among the cheapest aquarium fish species. Even aquarists with the lowest possible budget can get them. It, however, is now among the fishes listed as vulnerable and is on the decline in its natural habitat.

This is mainly because of the pollution of its environment and its overexploitation in the wild. Keeping the sun catfish in your aquarium thus means that you are also playing a key role in the conservation of this species.

You should also be vigilant to pick the signs that might indicate that there is something wrong with your sun catfish. The most common signs are inflammation of the fins and skin, bulging eyes, open sores, inactivity and cloudy eyes.

Loss of color is a common sign of bacterial infection in the catfish species. Even so, the sun catfish often loses its vibrant colors as it ages, and this might be normal in your fish. These signs are also essential when buying your fish to guarantee you pick a healthy one.

While the above tidbits will undoubtedly ease the care of your catfish, remember that pets are different. Take time to understand what yours wants and the best conditions for it to thrive. This way, you can customize the sun catfish’s care around your specific pet. 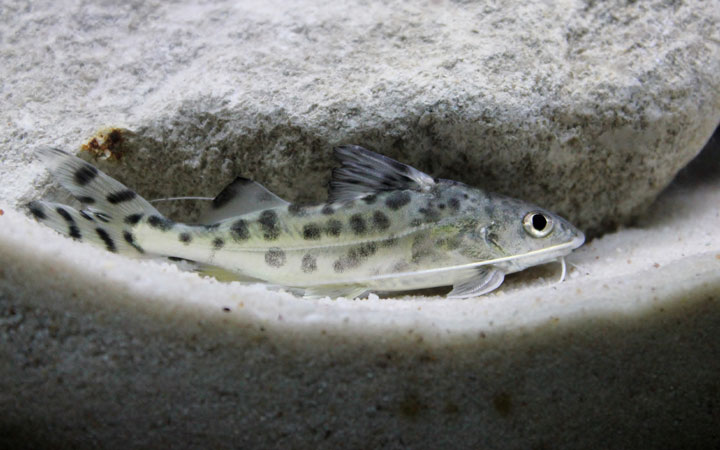 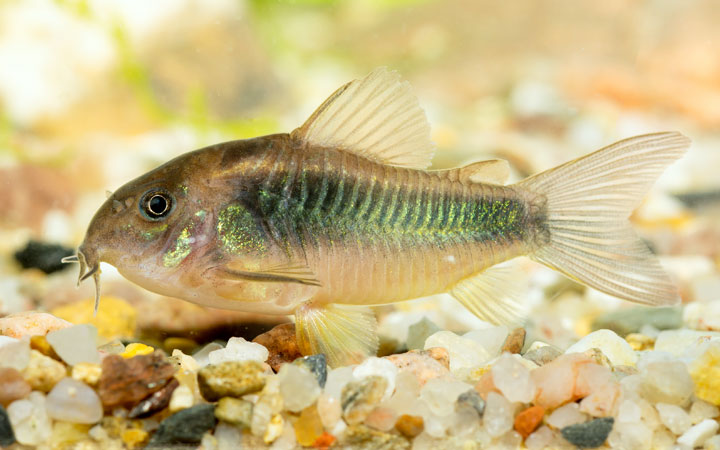 Guppies and Corydoras – Can You Keep them Together? 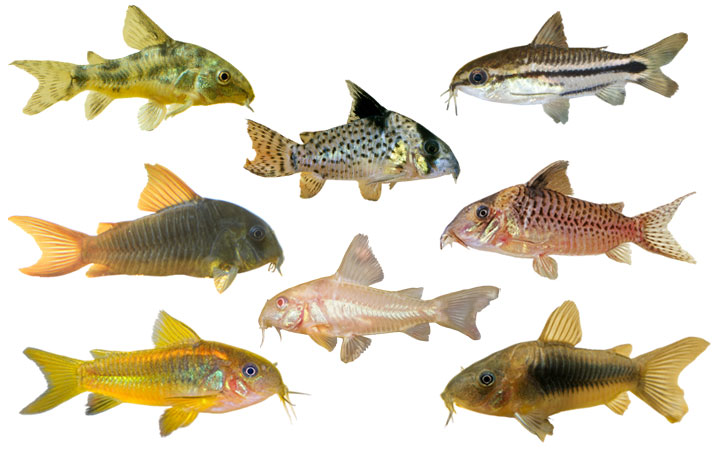