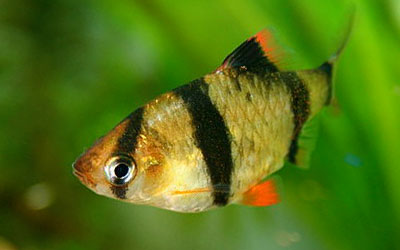 There is no doubt about the tiger barbs being one of the most fascinating tank fish you will ever come across. These fish are known for their vibrant colors, active behavior and fun to look at.

Certainly, these and other qualities make tiger bards a perfect choice for your home aquarium or tank communities.

Tiger barbs are typically classified as semi-aggressive tropical fish because of their nippy behavior and tendency to chase down any long finned or slow fish that crosses their path. Being a schooling fish, tiger barbs prefer staying together for companionship and social reasons.

That is why it is advisable to keep them in groups of about six or even more. Anything less than that can lead to heightened aggression towards other less aggressive tank fish.

When in large groups, tiger barbs can thrive well in large community tanks without any major problem arising from their semi-aggressive behavior.

But at some point, you may notice some fighting among themselves, especially when they are being introduced in the tank for the first time. This seems to be normal because most of the fish in the tank tends to fight for their own territories.

In addition to that, the tiger barbs fight most of the time while trying to establish a pecking order. Pecking order is a common term used to describe the hierarchical system of any social organization especially among different species of fish.

While in the tank, you will realize that tiger barbs spend most of their time hanging out in the middle-level sections of their respective tanks. As such, you must ensure that there is enough swimming space left between the decorations and plants within the tank.

On average, tiger barbs grow up to 3 inches in length but most of them become even smaller when raised in the aquarium environment. Also, tiger barbs come in a few varieties that can be found in captivity today. Perhaps these tropical fish have been bred selectively for their colors and that explains why you will come across a dozen different tiger barbs scattered all over different aquaria you can think of. Here are a few typical examples of tiger barb varieties that you should know if you are looking forward to having some in your home aquarium:

Despite their stunning beauty and irresistible vibrancy, tiger barbs are famous for one particular thing; these tropical fish are semi-aggressive with unusual temperament. Unlike most shoaling aquarium fish, tiger barbs are very aggressive in nature although their aggression is not tied to predation on smaller tank fish or territory just like other aggressive fish.

But with good practice in place, you can easily defuse their aggression between other types of tiger barbs and their tank mates. This statement alone answers the question, “are tiger barb fish aggressive?” Let’s look at the aggressive nature of these fish in details and what can be done to manage this vice so they may coexist among themselves or with other tank mates in harmony.

Tiger barbs show their aggression in two different ways. They display this behavior within their own schools or shoals and towards other related barbs. These tropical aquarium fish have a tendency to form a hierarchy. This means males resort to constantly chasing and nipping at each other while jockeying for higher positions within their own pecking order.

This show of aggression tends to become more intense, especially when the group is smaller. Naturally, tiger barbs may kill or maim each other when they are kept in smaller groups. Also, they are more likely to launch several attacks towards other species of fish sharing the same tank.

Because of their reputation for being aggressive and fin nippers all the time, many hobbyists are skeptical about keeping these misunderstood fish in the same tank with other species of fish. More often than not, tiger barbs would find their tank mates with long fins (such as angelfish, goldfish or bettas) to be their target of aggression. Therefore, you should never think of placing them in the same tank with these types of fish.

Have you ever wondered why tiger barbs, just like other schooling fish, tend to hang out in groups? Tiger barbs choose to shoal in large groups as a way of protecting themselves in the wild. The same vice is extended to the tank environment and that is why it is advisable to keep them in groups of not less than eight.

In the confines of their tanks, tiger barbs are most likely to get stressed if they are kept in small groups of less than 8 to 10 fish. As you may be aware, stressed tank fish succumb to diseases more easily compared to those that are less stressed or healthy.

On the other hand, tiger barbs’ large shoals are formed for a completely different reason. While in large schools, the aggressive nature of the higher ranking tank fish gets dispersed down to their subordinates. This way, it becomes extremely safer for the less dominant fish because they will not be seriously harmed by any dominant fish in the group.

Inasmuch as it is a challenge to predict how your tiger barbs will behave, there are other ways of making them less aggressive. For instance, you may keep them in shoals of their own kind and in large numbers to neutralize their aggression.  At the same time, you may keep them along with the similarly hardy species that can handle their harassment behavior. Good examples of tank mates that can cohabit the same tank environment with your tiger barbs include other barbs, danios, corydoras, loaches, gouramis, tetras, mollies, rainbow fish, and sharks.

Make sure that you provide your tiger barbs with enough food. Tiger barbs are naturally omnivores, meaning that they can feed on almost anything they find edible. Most of their diet consists of vegetable-based flake, frozen foods, and freeze-dried food. You can supplement their diet with small live foods like the glass worms, bloodworms, and brine shrimp among others.

When housing them, ensure that there is enough space for all the fish in the tank to swim around freely or establish their territories. Most importantly, their tank must be well-lit with plenty of vegetation, decorations and about two-thirds of free tank space that can accommodate them comfortably. The ideal tank for your tiger barbs should include a well-planted set-up with a capacity of 15 to 20 gallons, slightly acidic water with a pH of 6.0 to 8.0, a few rocks, driftwood and enough space for swimming.

There are a dozen options that you can use when adding some tiger barbs to your tank. First of all, you may need to add them in groups and not as individuals. This is a move to make all the fish in the tank not to have an edge over the rest of other tank mates when they are establishing their respective hierarchy.

Selective breeding among tiger barbs has resulted in a number of wildly different variations. As mentioned earlier, these variations have led to the emergence of greenish tiger barbs and pale albino tiger barbs in addition to the original tiger barbs. Once you identify these variations among your tiger barbs it will be easier to group them according to their appearance. In other words, different color varieties will definitely school together, resulting in a more uniform and dynamic school.

Tiger Barbs and other Tank Mates

As a result, the slower and shyer tank mates will starve to death if no drastic measures are taken in time. The same is true when tiger barbs are placed in the same aquarium with long-finned tank fish because they will become targets of constant fin-snipping, leading to fin rot and eventually lethal infections.

By nature, tiger barbs are aggressive tropical fish. Despite their aggression, these fish can add some color and activities in your aquarium much to your delight. As such you cannot avoid having them in your tank as long as you know how to handle them and how to manage their aggression. 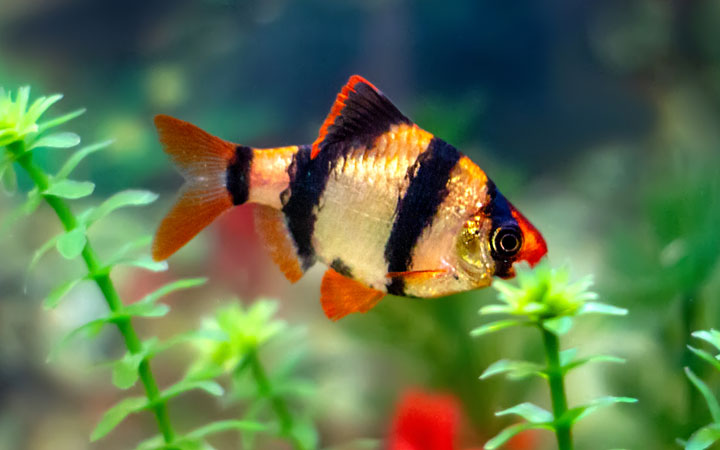 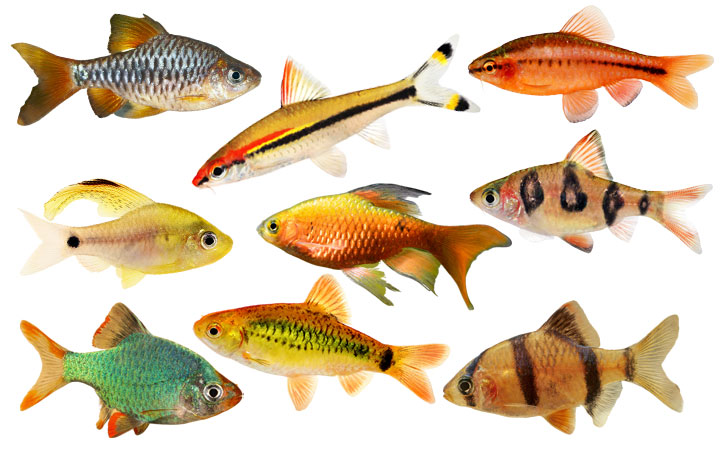 10 Types of Barb Fish to Keep in Your Aquarium

I was wondering if i could keep a Pakistan yoyo loach in the same tank as a school of tiger barbs my tank is 120 liters i thought i should ask someone who knows what there talking about before i get the barbs and they bully my yoyo loach.

Personally I’ve never kept yoyo loaches with tiger barbs. They might get along, because loaches usually stay at the bottom of the tank. If you want to keep yoyo loaches and tiger barbs together, also consider a school of loaches and don’t keep just one.