Ich or Ick is one of the most common betta fish diseases, although it is preventable and treatable.

It is caused by an external water based parasite that causes malaise, itchiness, and irritation after latching onto the body of a betta fish.

Ich is caused by the parasite ciliate protozoan Ichthyophthirius and causes high mortality rates among freshwater fish, including betta.

The betta fish is more sensitive to Ich than other species. Ich can quickly kill all fish in an aquarium in a short time if left untreated.

The parasite attaches to the host fish for 4-5 days then drops off and latches back after reproduction.

Ich can be easily cured with the Seachem ParaGuard medicine, available at Amazon.

If the disease is spotted in early stage and treated quickly, it wont’ cause much damage to your fish. So acting in time is crucial!

How Does Ich Reproduce?

Ich is caused by a protozoan parasite known as Ichthyophthirius multifiliis which reproduces by simple division whereby one parasite splits into two.

In one generation, one Ich parasite can divide into hundreds of other new parasites. The reproduction of Ich is supported by the presence of fish in an aquarium, and it cannot survive without live fish.

The parasite has a direct life cycle that is relatively complex due to its three life stages. The first life stage is on the fish body where it feeds, and at this stage, it is known as trophont.

The second stage is where it releases the fish and starts reproducing other new parasites known as tomont. The third life stage is when the newly reproduced parasites seek a host to attach and feed on, and they are known as theront.

Effective treatment protocols should be made to target the theront life stage as it is the most fatal because of many newly reproduced parasites.

The most common symptom of Ich in betta fish is that presence of white spots on the fins or scales of the betta fish. The white spots betta fish are a result of adult protozoan penetrating the scales when feeding leaving spaces on the outer layers on the fish’s body.

The white spots can also look like salt grains, blisters, lesions, or white dots on the body surface of the betta fish.

The only fallback of detecting the symptoms of Ich through observation of its body surface is that by the time the white spots are observable, the betta fish is already very sick.

The ideal thing to do is to observe fish for signs of irritation, weakness, decreased activity, loss of appetite, and flashing.

Other Ich protozoan will infect the gill of the betta fish and in such instances; the symptoms of Ich will not be visible on the body surface of the fish.

Betta fish that are infected with Ich in their gills will have signs such as swollen and pale gills which will be relatively easy to identify. It is important to note that other fish diseases can cause white spots betta fish and is thus important to carefully check the symptoms.

A professional aquaculturist should be consulted to examine the skin and gills of the affected fish before treatment is initiated.

If Ich parasite is detected, active treatment should be initiated as soon as possible to reduce the chances of the infection from spreading.

After diagnosing that aquarium betta fish are infected with Ich, it’s usually good practice to identify and isolate infected fish to their own aquarium.

But the most crucial consideration during treatment of Ick is to remove the parasite from the aquarium. Ick is generally easy to cure and treat when it is identified in its early stages, but if it has stayed longer without being detected, it can cause a high death rate to the fish.

Most treatment options work best when Ick is newly reproduced and when in its free-swimming stage. During the middle and adult stages, the disease is somewhat resistant to a variety of treatment option.

One of the standard solutions is to add aquarium salt to the aquarium when Ick is identified in its early stages. One teaspoon of aquarium salt should be added to 2.5 gallons of water.

Other treatment option includes raising the aquarium water temperature to about 85 degrees Celcius as Ich Parasite is heat sensitive. The warmer the water, the more likely Ich parasite will die and disinfect the aquarium.

The only precaution to consider when using this method is first removing the betta fish from the aquarium to prevent further harm from the high-temperature water.

For treating betta fish, we recommend doing an 80% aquarium water change and using a fish and filler parasite control product.

One of the best and most recommended parasite control product is the Seachem Paraguard, which is known to eradicate extreme parasites, bacteria, and fungal infections that affect aquarium betta fish.

There are particular cases of Ich that are most likely to kill your fish in the aquarium. One of these cases is when Ich has been left undetected for a long time. It is particularly important to note that Ich parasites can reproduce in hundred within a short time.

Their three stages of life involve attaching to their host fish, feeding to their adult stage, then releasing the host to multiply in hundred. After reproduction, the newly formed parasites are likely to double the number of Ich parasites that were initially present in the aquarium.

The newly reproduced Ich parasites attach to their host fish further making it weak, inactive, and with no appetite. Betta fish exposed to prolonged Ich parasite infection could die from hunger and extreme body surface damage.

For this reason, early detection of Ich is essential as it is easy to eliminate before the parasite inflicts more harm to the betta in the aquarium.

Another instance when Ich can kill betta fish is when the Ich is treated and eliminated, but the level of body surface damage is already significant.

When the body surface is significantly affected, betta fish are exposed to other protozoan and bacterial infections, which can be fatal. Such diseases affect the fish at its weakest moment.

The chances are that the betta fish will be unable to fight against these infections, and they will most likely die.

How to Prevent Ich Disease in Your Aquarium?

Prevention is better than cure, and one of the best ways to avoid the harmful effects of Ich is to apply preventative measures. Preventing Ich from infecting the aquarium can be achieved in various ways.

One method of prevention is to use a quarantine tank. The quarantine tank will be used to store newly introduced fish that have been bought. It is important to note that the primary cause of Ich is new fish in the aquarium, which can bring protozoan and parasite infections with them.

Another strategy is to quarantine aquarium plants for 3-4 days before introducing them in the aquarium to keep the betta fish from infections.

Quarantine tanks for new fish and aquarium plants should be treated with fish and filler parasite control products such as the one recommended in the treatment section.

Always be mindful when purchasing new fish for your aquarium at the store. It is advisable to choose healthy fish and avoid buying from stores where the fish on display are dead and appear diseased.

A high percentage of Ich infection results from purchasing fish that are already infected and introducing the parasitic infection in the aquarium.

Other tips for preventing Ich include changing aquarium water regularly to reduce betta fish stress, which is another contributor to Ich infection.

Another consideration is to avoid overstocking of betta fish in the aquarium to ensure that the fish have room to breathe and move without issues.

Aquarium accessories might also harbor Ich and other infectious parasites if their source was infected and it is thus essential to consider this before introducing new plants.

Ich is a parasitic infection that is highly contagious meaning it can be spread from one betta fish to the others. This is possible because after reaching its adult life stage, it releases the host fish’s body to reproduce.

After reproduction, the newly formed Ich parasites in search for their host can infect other betta fish in the Aquarium. Because the infection is contagious, it is essential to quarantine newcomer fish and aquarium plant in a separate treated tank before introduction to the main aquarium.

In conclusion, Ich parasitic in betta fish is easy to identify by observing the fins, skin, and gills of the fish. The early detection of Ich infection is paramount to effective treatment and elimination before it causes death to your betta fish.

Some of the effective preventative strategies include using a quarantine tank to harbor newly acquired fish and aquarium plants. The other prevention measure is using fish and filler parasite control product such as Seachem Paraguard to eliminate parasites and protozoan in the aquarium. 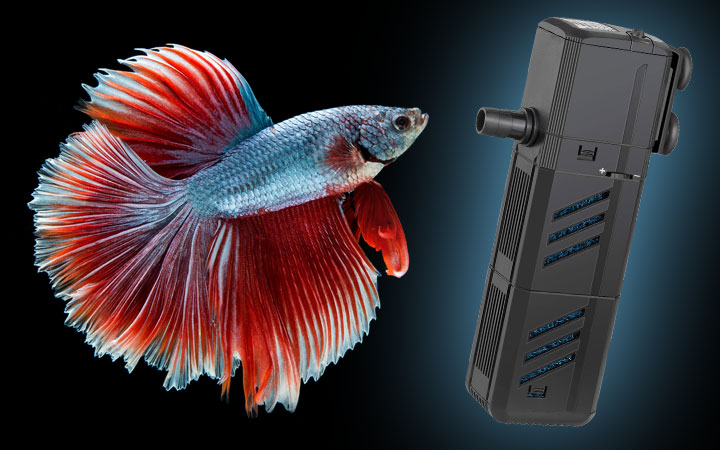 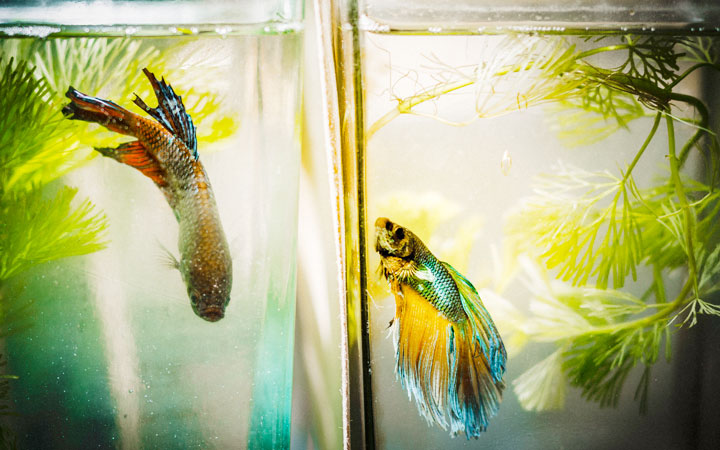 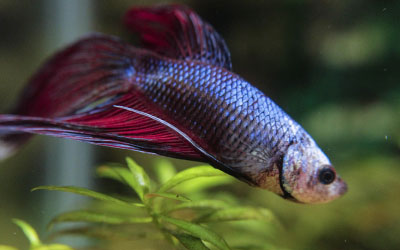 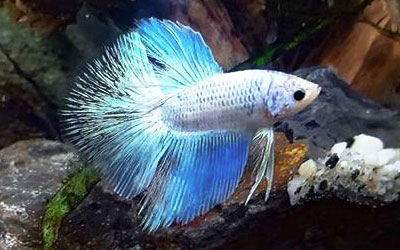 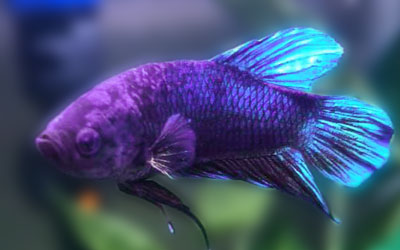 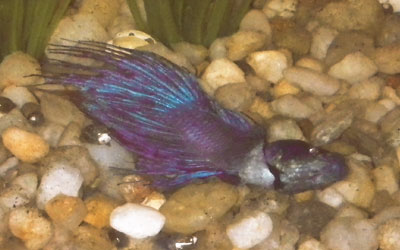