How to Care for Auratus Cichlids?

Home » African Cichlids » How to Care for Auratus Cichlids?

The Auratus Cichlid (Melanochromis auratus) is a highly-aggressive cichlid that is also called the Malawi golden cichlid or the golden mbuna. The fish is well-known for its distinctive features. 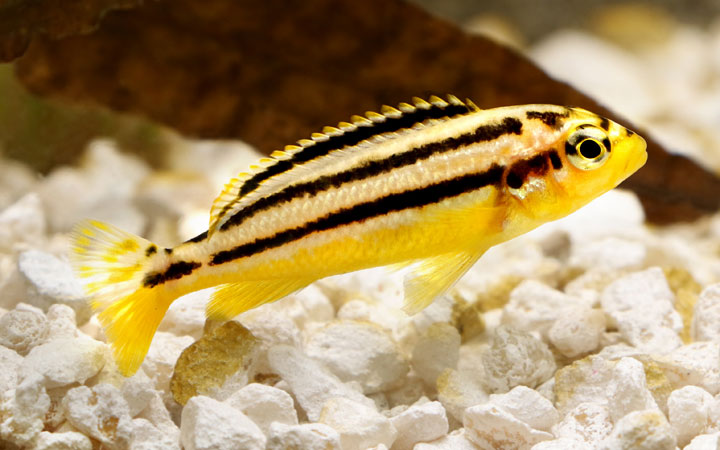 It is elongated with a narrow mouth, rounded snout, and continuous dorsal fins. Their teeth are closely spaced, making them look like incisors. The teeth are designed that way to enable the fish to feed on aufwuchs (critters, biofilm, and algae)

The Auratus Cichlid can grow to about 4,5 inches (11-12 centimetres) in length. Some might get bigger while in captivity due to good care. Compared to males, females are smaller in body size.

This fish species can live up to 5 years when conditions in their habitat favor them.

The fish is coveted for its coloration, which differs between genders. Adult males have a black or dark brown body with yellow or light blue stripes on the upper part of the body.

They somewhat display a transparent yellow dorsal fin along with some black speck that seems to form a horizontal line. Another thin yellow line (edged in neon blue color) runs horizontally right in the middle of their body. This line starts from behind the gill region all the way to the caudal fins.

Female Auratus Cichlids have a bright yellow body with black and white stripes across the upper part of their bodies. They are actually golden in color  and their black dorsal fins are edged in gold as well.

Their entire backs are black with white/blue-trimmed lines running horizontally from behind the eyes all through to the caudal fins. Most of their fins are golden apart from the tail fin which is white with a few black spots.

This fish species is among the most prevalent mbuna cichlids in aquariums. Although they are among the most difficult fish to raise and handle, Auratus Cichlids add vibrancy and liveliness in a fish tank.

If you are planning to have a few of these fish in your aquarium, here is what you need to know about them.

The fish is classified under a group of cichlids called Mbunas, which includes 13 genera. The name Mbuna is Tonga for “rock-dwelling” or “rockfish”.

This fish inhabits rocky outcrops, where its closely-shaped teeth help to scrape algae and aufwuchs. The aufwuchs can contain zooplankton, snails, insect larvae, and crustaceans.

Wild Auratus cichlids are a polygamous species, where the male establishes a harem of several females. 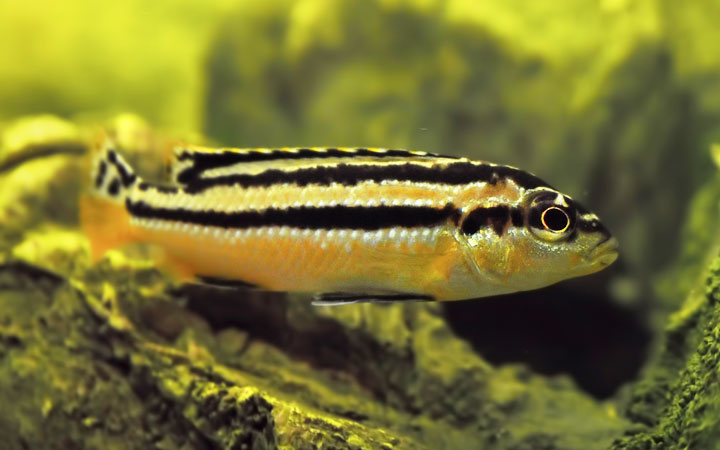 Auratus cichlids can grow between 4 to 6 inches. The minimum tank size for these cichlids is 55 gallons, although it is better to start them with a 75-gallon aquarium. You will need more than 125 gallons to keep more than one male Auratus cichlid.

You need a lot of rocks to keep this rock-dwelling species comfortable. Use them to create hiding places and escape paths for the fish.

Rockscape will especially become crucial if you have several auratus cichlids in the tank. The dominant male uses rocks to mark his territory, and you can pile several of them together to break the line of sight in the tank.

The subdominant males, females, and fry will retreat to the crevices and hide from the aggressive male.

Rocks can help you keep males together, and each of them will create their little territories. Some aquarists use limestone rock to keep the water hard.

The fish will uproot and snack on any plants that you add, and they will even uproot plants from clay pots. Wild auratus cichlids live in a sand substrate, but you can use gravel too. You can utilize a crushed coral substrate to keep the PH help.

Lake Malawi is teeming with minerals, and you can use lime-based ornaments to replicate this environment. This means that hard tap water will not be a problem with these cichlids.

You can use small salt does or aragonite sand to boost the water’s carbonate hardness. The fish can tolerate a salinity level of below 1.002, and it should not be kept in full-brackish conditions.

The higher PH will make ammonia more fatal, however, and you need efficient filtration and regular water renewals. The cichlid thrives in oxygen-saturated waters, and you can use an airstone to boost aeration. The ideal temperature and PH range are 73.0-82.0ºF and 7.7-8.6, respectively.

The Auratus Cichlids are likely to deteriorate when subjected to poor tank water conditions. They can get infected with Malawi bloat if their herbivores dietary requirements are not met accordingly.

Since they are messy fish, you need to consider doing water changes of about 20 or 50 % per week depending on the available bio load. In case you are overstocking your tank to control aggression among them, you should consider partial water changes every week.

Such practices will keep the environment within the tank conducive for your Auratus Cichlids and other tank tankmates. After all, tank water conditions will determine the survival of your fish regardless of the species or age.

Wild Auratus Cichlids nibble on zooplankton and aufwuchs, which is German for surface growth. This growth is comprised of algae, biofilm, and tiny critters.

The fish grazes on the growth in different ways, and they eat varying lengths of the aufwuchs. The mbuna have therefore specialized their methods of grazing, and there are many species in Lake Malawi as a result.

The Auratus Cichlids do not develop any feeding techniques in the aquarium, and they become susceptible to the ‘Malawi Bloat.’ This condition is characterized by a swollen stomach and neck, and it is always fatal.

The cichlid will do well with a primarily herbivorous diet and low animal protein. Spirulina should be the base food, and other meals can include algae wafers, zucchini, cucumber, and spinach. Spirulina, in particular, will help them maintain their colors bright.

You can refrain from feeding them once a week to prompt them into clearing any algae in your tank. Also, avoid feeding them small quantities of food several times in a single day.

Instead, consider giving them one large feeding at once. This will help keep the water quality higher in the tank for a very long time.

Their diet should consist of flake foods, pellets, live foods vegetables, fruits, and meaty food (in some diets). Even though these fish are omnivores, don’t give them foods such as beef heart because they can cause digestive problems.

The Auratus’ Cichlid aggressive nature makes it a poor candidate for community tanks. The best way to keep the fish with its kind is to buy one male and several females and provide adequate hiding spaces.

The male will want to be the only dominant one in an aquarium, and it will attack any males as soon as they start coloring up. The aggressive male will also prevent any fish from spawning due to the constant harassment, and they may want to spawn with every other female in the aquarium.

The aggression is not only reserved for the males, as the females can take on the dark coloration of the males in the absence of a dominant male. The dominant female has been known to kill subordinate males.

The only way to minimize aggression is to add plenty of rocks and use them to break up territories. Do not keep the Auratus Cichlids with peaceful species like Peacocks.

Some aquarists keep the fish with other Mbuna with different partners. A large tank is, however, required and the best practice is to keep them in a species-only setup.

Keep in mind that Mbuna will easily hybridize in the aquarium, and do not keep the auratus females with males of another community.

Auratus Cichlids are easy breeders as long as the right conditions are met. The male establishes a mating territory by digging a nest in the sand or preparing a rock. He lures the female with his intense coloring and dancing, and they start circling together.

The female cichlid collects her eggs in the mouth, and the male releases the sperms to fertilize them. The female will hold the eggs for up to three weeks without eating, and some aquarists opt to take them out and incubate them in a separate tank.

Keep the fry on a diet of brine shrimp nauplii and dry foods, and provide them with hiding spaces.

The Auratus Cichlid thrives in a species-only tank due to their aggressive nature. They like a lot of rocks since they inhabit rocky outcrops in their native habitat of Lake Malawi.

Use these rocks to separate territories and tame the aggression of the dominant male. 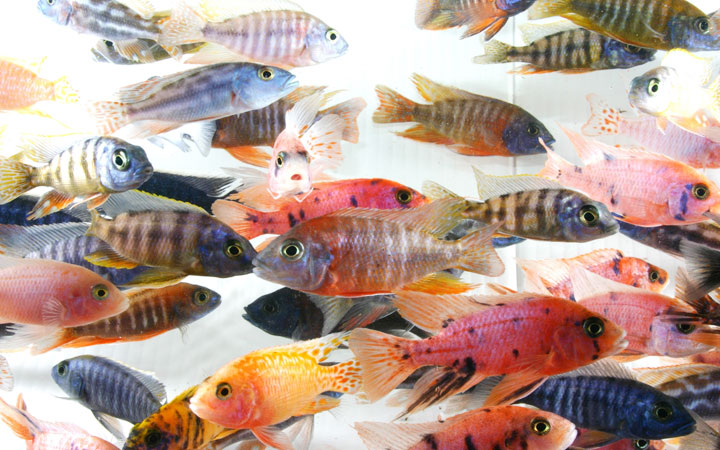 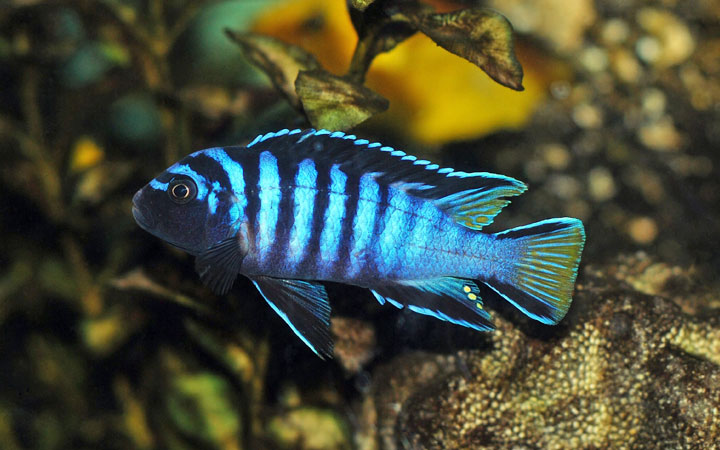 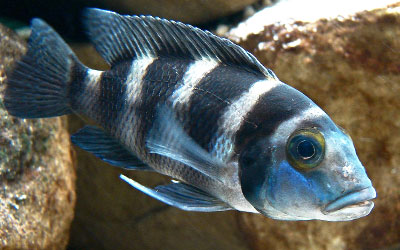 Do African Cichlids Eat Their Fry? 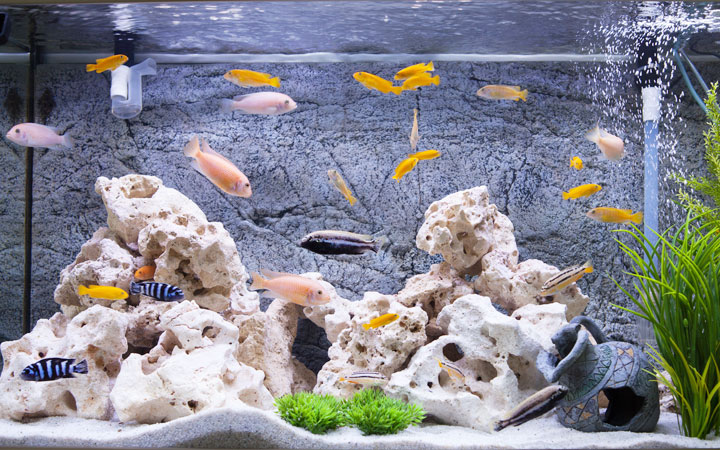 How to Set Up a Cichlids Fish Tank?