The health of any axolotl depends on the conditions and treatment it receives. Axolotls are the only vertebrates capable of regenerating many body parts in the course of their lives.

Body parts can also be transplanted on an axolotl to become fully functional.

Axolotls will generally remain healthy in optimum conditions. To detect illnesses in your pet, look out for symptoms like a poor response, anemia, skin lesions, lack of appetite, and gill degeneration.

Axolotls are prone to stress, especially if the tank has poor water conditions. The leading causes of stress in the amphibians are:

Water quality will either make your axolotl healthy or stressed. Ammonia and nitrite levels should be zero in the tank to avoid poisoning your pet. If the gill filaments are curled and your pet has reduced appetite, check the water for ammonia. The veins can also become pronounced, and the skin visibly irritated.

In the case of nitrite poisoning, the gills will be very pale and turn brown, and the axolotl will seek the air stone or the water inlet. Advanced symptoms can include lethargy, reduced appetite, and gill damage.

The ammonia and nitrite levels can reach toxic levels if the tank has inadequate filtration or the water changes are not enough. Overfeeding will also encourage the levels of ammonia.

Axolotls demand a lot of space for swimming and establishing territories. They are also not social animals and can be stressed by tank mates that nip at their fins.

An overcrowded tank compromises the quality of the water, which further stresses the pets.

Axolotls are solitary animals for the most part, but they can co-exist with other aquatic creatures.

If you keep axolotls with smaller fish, they will attempt to feed on them, and in some cases, choke on the aquatic meal.

Bigger fish, on the other hand, will chew at the axolotl’s fins and gills and stress the amphibian. To avoid these scenarios, it is best to keep the axolotl alone.

In their wild habitats, axolotls are adapted to stable water conditions, and your tank should not have strong water flow.

If axolotls detect a strong current, they will lose their appetite in addition to developing other stress-related symptoms. The most common indicator of strong water flow is forward-turned gills.

The amount of water flow in your aquarium will be informed by the kind of filter or air pump you use. You can reduce the flow by using spray bars and other flow-spreading outlets.

In ideal water conditions, the levels of ammonia should be zero. If a tank is not cycled effectively before the amphibians are put in, there can be concentrations of the element.

Ammonia levels also rise because of the presence of uneaten food, fish waste, and decomposed organic matter from live plants. Axolotls also produce a lot of waste, which, if left in the aquarium, can boost the levels of ammonia.

Regular testing is required to maintain zero ammonia levels. If you detect any concentrations, lower the PH, and do a 50% water change. Several water changes may be vital to lowering the ammonia in a short period.

You can also neutralize the ammonia with a PH chemical control purchase. Restrict feedings, and if the levels are particularly high, stop feeding completely.

You can place the pet in a dish and place it in the refrigerator for quick relief. Chillers also come in handy when you want to maintain cool temperatures in an aquarium.

Axolotls are quite prone to intestinal impaction because they feed by sucking water via their mouths. Substrates like gravel and pebbles will cause impaction in the digestive system of the amphibian. Axolotls can also swallow smaller tank mates, which can also lead to impaction.

Floating is one of the signs of constipation and bloating due to impaction. It is, however, easy to misdiagnose impaction from floating alone because the amphibians do float from time to time.

If the floating is caused by temporary constipation or indigestion, the axolotl will return to the bottom of the tank once the gas is passed out. If they are unable to go back to the bottom, floating can be a sign of impaction. Additionally, the amphibian will be unable to feed, and they will engage in frantic swimming.

Prolonged floating will also stress out your axolotl, mainly because they do not like brightly-lit surroundings. If you suspect impaction, lookout for signs of bloating like their tail or bum floating on the water’s surface.

The amphibian can also get cuts in its mouth, which can encourage further infections.

In acute cases, the pet can regurgitate to expel the foreign body. If the object must be removed, the axolotls will be put under anesthesia, and a pair of alligator forceps will be used to remove the object.

Axolotls are susceptible to parasites that are passed on by live food. These parasites include ciliates, Opalina, Hexamita.

The main sign of a parasitic infection if the axolotl’s refusal to eat. You will need to ensure that your water is not contaminated, however, to conclude that the cause is parasites. The axolotl can also secrete mucus if affected by protozoans like Costia and Trichodina

The mode of treatment will depend on the kind of parasites you are dealing with.

Enteric protozoans like Hexamita will respond to metronidazole at 5 mg/g of food for three to four days.

Salt baths are a common cure for parasites that attach to the skin. Leeches, for example, will attach themselves to the axolotl’s gills or body. If you remove them manually, they will cause damage to the pet because they burrow past the skin’s surface.

Prepare a 2.5% salt solution and immerse your pet for 15 minutes. The leeches should detach themselves, although you can add more salt if the parasite does not. Concentrations of magnesium sulfate can also remove free-living flatworms.

Most protozoal ectoparasites can be removed by formalin at 0.025-0.050 ml/L for about eight hours.

Bacterial infections can be a result of poor water quality, unsterile plants, or infected live food. The infections are quite common among captive axolotls, especially because they are mainly caused by poor husbandry.

The major symptom of bacterial infections in axolotls is reduced appetite.

If the amphibian has been affected by red leg bacteria, you will observe red patches on its body. The bacteria Aeromonas hydrophila causes fin rot, tail rot, ulcers, and in the axolotl.

Axolotls will be vulnerable to fungal infections in tanks with poor water quality or if the temperatures are too high.

Fungal infections will appear as white and fuzzy patches on the animal’s body.

Most aquarists who rear axolotls depend on salt baths to deal with fungal infections.

The first step is to isolate and quarantine the affected pets. They will need to have a daily change of water while in quarantine.

You also need non-iodized salt like aquarium salt or sea salt. Pour a liter or two of dechlorinated water in a container and use two or three teaspoons of salt for every liter. Ensure that the water has nearly the same temperature as the water in the isolation container.

Place your pet in the bath and cover the tank because the animal might jump out. You can start the baths at 15 minutes and reduce them to 10 minutes for one or two weeks. The pet’s skin and gills will be damaged if you keep it in the solution for more than 15 minutes.

The fungus will gradually come off, and the wound will begin to heal. Ensure the water parameters of the aquarium are appropriate to reduce the chances of re-infection on the wound.

Other aquarists use disinfectants like Mercurochrome to deal with fungal infections. Care must be taken with these reliefs, however, as the wrong dosage might affect your pet.

The Saprolegnia fungus targets the internal tissues of aquatic organs. Its spores are present in most water sources, and it affects an axolotl when its immune system is compromised.

Infection may be triggered by an inappropriate environment characterized by decaying organic matter.

Your axolotls will also be vulnerable if it is highly stressed by aggressive tankmates or other factors. In some cases, the infection will be secondary to another disease.

The fungi manifest as a grey or white fuzzy growth on the pet’s gills or head. As debris accumulates, the growth appears as tan to brown. The pet will also suffer partial loss of gill stalks. Since the fungi affect the axolotl’s internal organs, it may lead to the death of your pet. The veterinarian will perform skin scraping to identify the hyphae of the fungi under a microscope.

Identify and address the cause of your pet’s stress before giving any medication. It can be a strong water flow, poor water quality, aggressive tankmates, high temperature, or unsuitable housing conditions.

Treatment involves adding potassium permanganate to the water or performing salt baths. Isolate a female that is almost laying eggs or recovering from laying legs and lower the temperature in the quarantined container.

Axolotls can develop tumors that involve the pigment cells and are typically benign. They can be removed by a vet, especially if they cause impediments.

How to Dispose of Dead Axolotl?

The ideal way to dispose of a dead axolotl is to either bury in the yard or to wrap it in a plastic bag or container and place it in the garbage. Avoid flushing the pet because it can introduce bacteria in the water supply.

It is easy to confuse a fungal infection on an axolotl with ich. Ick/ich is a common infection among fish, and rarely affects amphibians.

If your tank has ich, however, it is best to remove all the residents and treat it comprehensively.

Can Axolotls Have Camallanus Worms?

Camallanus worms mainly target fish, although it is best to keep them out of your tank even if it only has axolotls.

Can Axolotls Have Cancer?

The axolotl has impressive regenerative attributes. They can regrow limbs, jaw, skin, tails, and even parts of their brain. Additionally, the amphibians have displayed great cancer resistance.

The animal’s extraordinary capabilities were the focus of cancer research by a team from the University of Nottingham. An extract from axolotl oocytes was used to reactivate the suppressor genes of cancer cells and thus control the cells.

The axolotl oocytes were found to have a strong capacity to alter epigenetic marks on human DNA. Proteins in the amphibians also closely resemble the ones in humans, making future development in the research possible.

Axolotls can be quite easy to keep, as long as water parameters and housing conditions are maintained in the recommended form. Infections and diseases are, however, quick to attack and impact the animal.

Most illnesses in axolotls are caused by poor water conditions. They are prone to ammonia and nitrite poisoning, in addition to fungal and bacterial infections.

Axolotls also commonly succumb to digestive impaction because of swallowing inappropriate items like pebbles and gravel, and even other creatures. Since the pets love cold temperatures, they will easily develop hypothermia if temperatures are too high. 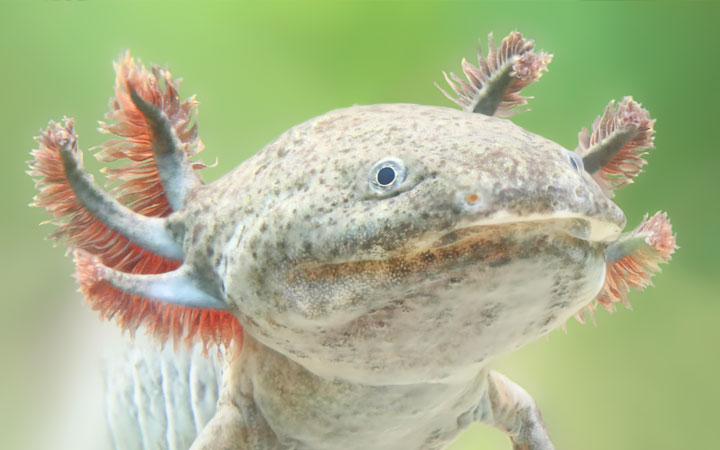 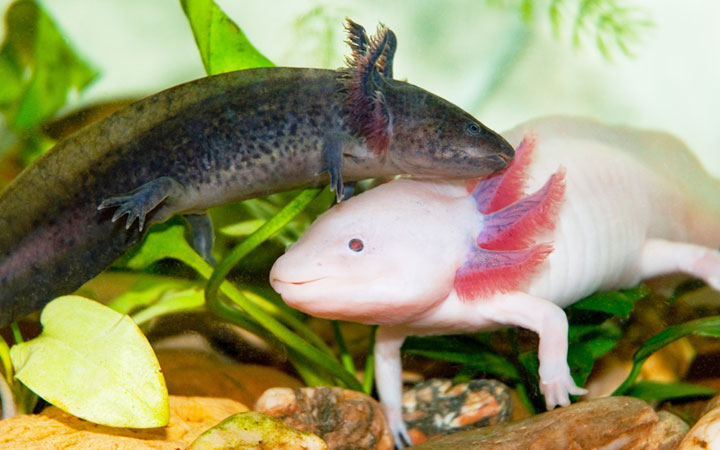 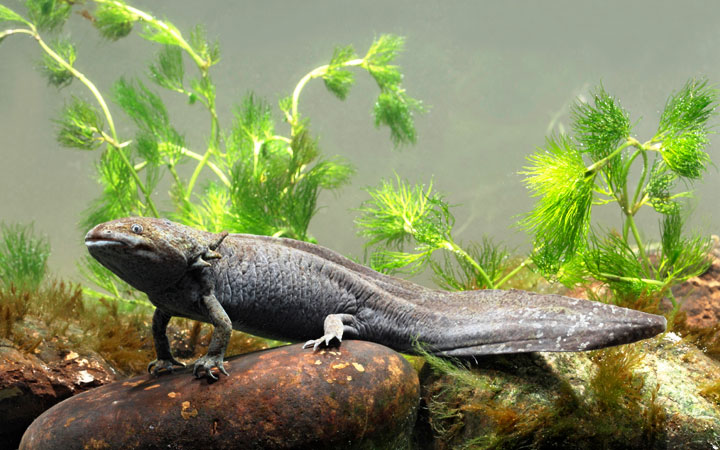