Have you been looking for an unusual yet attractive fish to keep in your tank?

Then Limia fish may be a perfect choice. Limia belongs to a genus of livebearing fishes under the Poeciliidae family, which includes other creatures like swordtails, mollies, guppies, and platys. 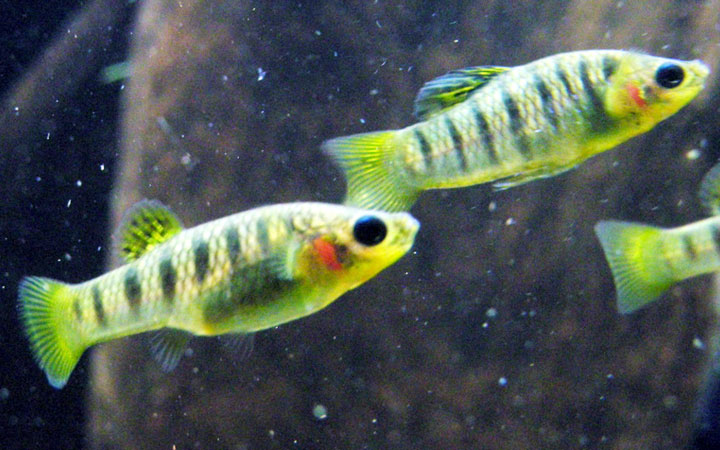 Even so, the Blackbarred limia (limia nigrofasciata) and its closest relative, the Tiger limia are arguably the most popular species among aquarists across the country.

If you’re considering keeping this type of fishes, here’s a comprehensive guide for you:

It’s important to note that most Poeciliids inhibit fringe habitats characterized by harsh and unstable physical (abiotic) conditions like a variable or extreme salinity and temperature levels.

And limias are no different. Though some species prefer fresh water to brackish water. All the same, few other fish inhibit the kind of tropical and subtropical areas Limias inhibit.

If anything, the diversity of habitats associated with individual species under the Poeciliids family suggests that these creatures are a highly adaptive and robust group. Not only that.

Limias originate from the waters of West Antilles- an archipelago bordered by the Gulf of Mexico to the northwest, the Caribbean Sea to the west and south, and the Atlantic Ocean to the east and north. There are many theories as to how Limias ended up inhibiting their ancestral waters.

It’s advisable to keep Limias in groups of 6 to 8 and at least a 20-gallon tank. But bigger is always better because the more the room these fish have to swim, the less stressed they behave.

Take note that Limias can grow up to 2.5” long (including their tails). And usually live shoaling in the wild. So for them, staying in groups is paramount to their wellbeing.

What’s more, ensure to heavily plant your Limia fish tank with lots of hardy plants. Plants will improve the water quality and act as food as well as hiding places for these fishes.

If anything, Limias are most colourful and active in a well-decorated, dark-bottomed tank.

Limias also tend to jump when they feel threatened or scared. As such, secure your aquarium with a tight-fitting lid at all times. And when it comes to the substrate, you can either have no substrate or add gravel to a level of not more than ¼” deep.

Yes, gravel has cosmetic benefits but it can easily become deadly, especially when it fills up with bits of uneaten food that contaminate the water.

Talking about contamination, most aquarists recommend installing a bio-wheel filter in a Limia fish tank. The bio-wheel acts is an ideal place for ‘beneficial’ bacteria to thrive.

These bacteria are vital in that they help to maintain the water quality by digesting waste materials.

Also, consider adding lava rocks in your tank to keep the nitrate levels in check. Lava rocks will not only greatly improve water quality, but also provide ornamental benefits as they appear natural and quite beautiful.

You just have to be careful when choosing your type of lava rock considering that most of them can be poisonous to fish.

All the same, your tank water conditions should mimic this species’ natural Caribbean conditions. Meaning that the temperature should range from 65 °F to 80 °F, though a steady 74 °F is best.

Equally important, the most ideal pH for limia fish is anything between 7.0 and 8.4. These fish won’t thrive in soft, acidic water. To summarize, the following water conditions should suffice in a Limia fish tank:

Take note that with all livebearers, it’s important to perform a 25% water change every two weeks or 10% every week.

Limias are omnivorous fish that will gladly accept both meat-based foods and vegetable matter. As such, dry foods such as algae-based pellets and flakes make a good staple for these fish.

And being fish that prefer to spend most of their time on the middle tier part of the tank, Limias also graze on surface algae and live plants. Not only that.

It’s advisable to occasionally offer your Limias treats like frozen and live brine or shrimp to complement their diet. Remember, the size of the food you give your fish should match the size of their mouths.

And it’s always better to underfeed your fish since uneaten food can encourage dangerous rises in nitrite and ammonia levels as well as cloud your tank.

In terms of feeding schedule, feeding your fish once (or twice) a day should be sufficient. Note that providing Limias with a proper diet ensures your fish grow to their maximum size, remain disease resistant, and live long healthy lives.

Most small limias are relatively active fish with a peaceful temperament. Yes, they’re never aggressive with each other unless the tank is too small.

The only limia species that doesn’t confer to this rule are the big ones like the Grand Cayman Limia and Limia Perugia. These are highly predatory and will attack any tank mate they consider prey.

Aquarists recommend keeping bigger Limias with other large species and the smaller ones with any other peaceful freshwater creature.

For instance, you can start by keeping 6 Humped-back Limia; four female and two male. Then house those with easy-going tank mates like hardy Tetras, Danios, Corydoras, and small Gouramis.

Most Limia species are sexually dimorphic. Meaning females and males feature different sexual features. Also, these fish are lecithotropic. In that, the females have pre-fertilization maternal provisioning (yolked eggs) for breeding.

Even so, for breeding to occur, all you need to have is a male and a female limia in one tank. It can take a few months for you to notice the first fry but once these fishes get used to their new environment, they’ll reproduce more regularly.

Equally important to note is their courtship behaviour. Females select the most dominant male to breed with depending on the males’ behavioural and physical traits.

Competition is, thus, quite high in Limia mating systems since competitive ability correlates with having a higher fitness.

All the same, courtship behaviours and dominance are common in Limia sexual selection. Not only that.

Larger and more colourful Limia males court females whereas the small ones use coercive or sneaky behaviour for example force mating. So, how can you different males from females?

When it comes to one of the most common species, the Humpback Limia, males feature distinct bands and humps on top of the yellow-grey colouration common to both sexes.

Males also have black spots on their caudal and dorsal fins, as well as a gonopodium fin used for mating with the female.

In fact, the intensity of colouration on your Limia may indicate how motivated that fish is for reproduction.

And if a female is receptive to a male, it allows the potential partner to swim closer.

This is when the male gets an opportunity to thrust its gonopodium fin into the female’s genital pore, in what experts describe as sneaky copulation. But one thing’s for sure- it’s highly unlikely that you’ll ever catch your fishes in the act of mating.

Because the more the fish in a tank, the more sneaky a male limia’s behaviour will be. What’s more, after fertilization, it takes about 2 to 3 weeks for the female to give birth to young ones.

Though you should eventually isolate fry since the bigger fish can easily prey on them.

It takes about 3 to 4 months for fry (born all females) to become fully-grown adults, which is when males sex out. Still, the youngest large males may take as many as 5 to 6 months to start mating.

Bottom line. For limia fishes to successfully mate, ensure that your tank has clean water with the right conditions because visual cues are vital in their reproduction.

If the waters become too cloudy or timid from pollution, the fish may alter their sexual selection and reproduction behaviours.

In as much as they are relatively rare, Limias’ popularity in the aquarium market is growing tremendously.

People love them for they’re easy to keep, easy to breed, and hardy, as long as you house them in a clean environment. And now comes the best part.

Limias are extremely attractive! These fishes feature colours that beautify your aquarium like never before. Try Limias today! 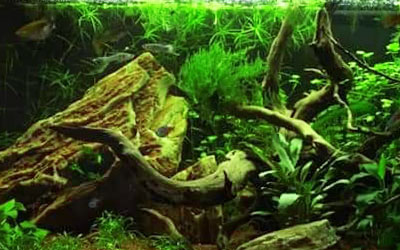 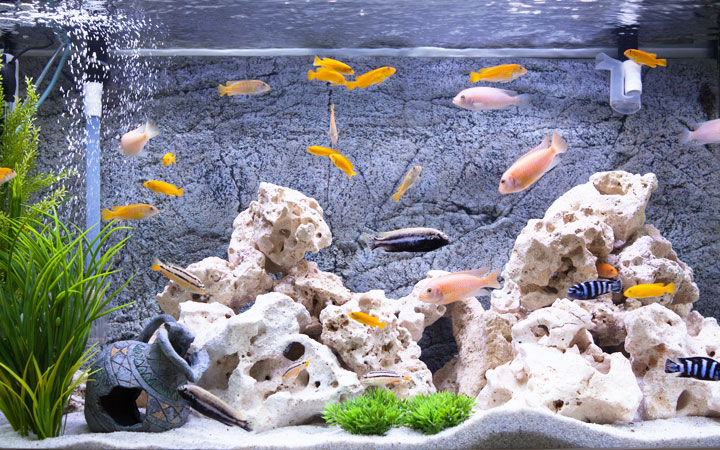 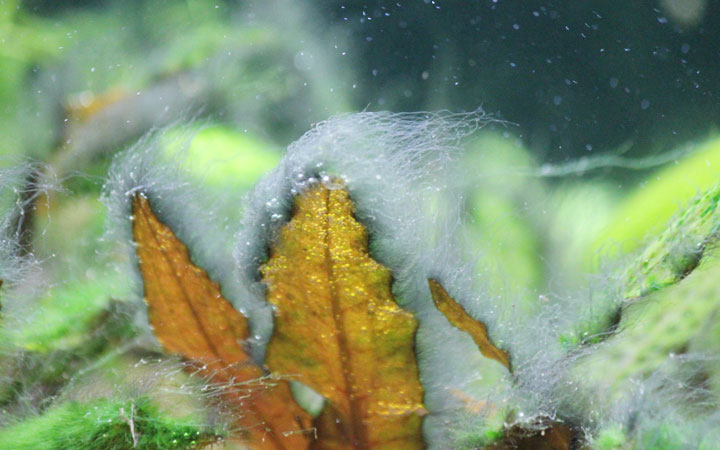 10 Aquarium Algae Types You Should Know About 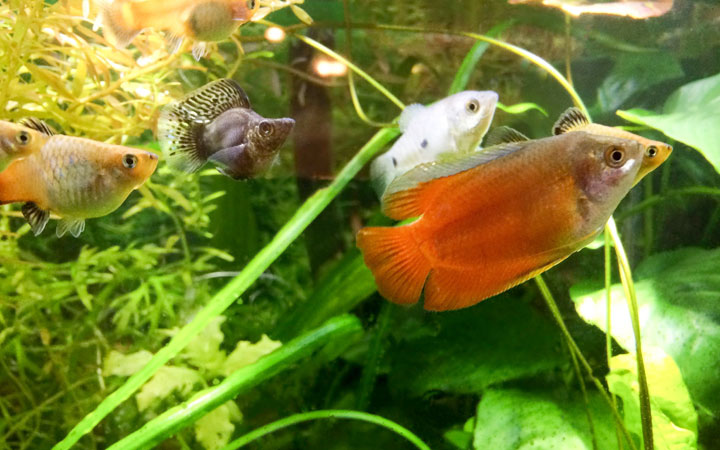 10 Pet Fish that Can Live Together