Home
Fishkeeping
Top 10 Livebearing Tropical Fish You Should Know About

Livebearers are busy, interactive, fun to watch fish. They also reproduce at a fast rate, which means that you can end up with a lot of fry and fish.

You can trade these unwanted fish in your local pet store or just give them away for free. Most aquariums, which are populated with live-bearing fish, are able to pay for themselves.

If you are planning starting a live-bearing fish tank, this article will help you choose from a wide range of fish species. Here are the 10 most live-bearing tropical aquarium fish you should know about.

Some of them are very popular, while others can be rarely found in home aquariums.

Guppies are among the most popular freshwater aquarium fish species. Most people like them because they are highly adaptable, which means that they require lesser care than the other species.

Females are generally grey while the males may have splotches or stripes of various colors. They are among the easiest fish species to breed because they do not take any coaxing from the owner.

After buying them, keep them in a separate tank and leave them to do the rest. If your primary goal in fish breeding is to produce many baby fish, particularly over time, a guppy will be a good choice for you.

After insemination, a female guppy can store sperms and use them to fertilize for around eight months. In other words, after you have removed the father from the aquarium tank, the female will produce fry continuously for eight months.

Mollies are hardy and highly adaptable and they are therefore a good pet fish for the beginner aquarists.

The mollies are also known to produce very many babies. In most stores, you will realize the most of the mollies in tanks are pregnant because they procreate more often without the help of the aquarists.

Due to their fry producing nature, people use them as live feeds for the carnivorous fish. After birth, the fry will start eating algae or pellet food in the aquarium tank immediately.

Platys exist in several bright rich colors and they are non-aggressive as well very hardy.

They produce babies that are smaller than those of swordtails and mollies are, which means that they are harder to breed.

Mostly, the pet stores supply them when pregnant. If you buy platys that are not pregnant, you will generally need to maintain a one to three male to female ratio in your tank.

That way, you will make the males less aggressive and reduce the stress in females. That way, the females will produce more fry. A female can produce around 20-50 fry.

Swordtails are closely related to the platys. Swordtails come in various colors and you can easily differentiate males from females because they have sword-like tails.

They are non-aggressive and are therefore a great addition to your passive community tank. The swordtails can produce babies after every 28 days.

To make the males less aggressive, you just need to maintain a one to three ratios of males to females. The ratio will be perfect for breeding and it is the same ratio to maintain for platys.

Franklyn F. Bond collected them for the first time in the 1930s but Professor John A Endler collected the Poecilia SP in the Laguna de Patos in the northeastern peninsula in the 1970s.

The Endler’s guppy fish did not receive its name until the early 1980s when Dr. Kallman introduced it to the aquarium community in Germany.

A classification system is now available to help people distinguish the Endler’s and depending on the place of origin.

Any Endler’s guppy fish, which originated from the waters of Venezuela is considered a Class N Endler. The Endler’s of unknown origin are classified according to their size, color and shape and fall in class P. Those cross breed with other livebearers fall in the Class K Endler category.

Within the many years, the Endler’s guppy fish have been in the aquarium community, people have hybridized them with other livebearers including the Fancy Guppies to achieve the unique brilliant colorations.

The fish are now more common among hobbyists. One of the things that have made them more common is their wild psychedelic coloration and the ease of care.

The fish require a 20 gallons aquarium tank and are more tolerant to the changing conditions of aquarium water. For them to flourish, you will have to add the hardy plant varieties like the Java Moss and the Java Fern.

The plants will handle increased water hardness in your aquarium. The other peaceful livebearers will make great companions. The fish are an omnivore and require algae-based flake food and freeze-dried bloodworms, brine shrimp, tubifex will offer the guppies with proper nutrition.

Mosquitofish are a perfect addition to any outdoor pond or aquarium. A mosquitofish will eat hundreds of mosquitoes within a short period, which means that it is a good choice for people who would want to keep their backyard bug-free.

The Limia fish is the only livebearer fish that looks unusual. In addition to taking on beautiful coloration, such as black vertical bars and yellow fins and flanks (dorsal and caudal dotted with small black spots).

The males develop arched back too. For them to flourish, you will have to add many plants to enable the fry to hide from the adults after breeding has taken place.

Avoid keeping the species with similar live-bearing species to prevent inbreeding. However, you can keep them small with the small non-live bearing species that are peaceful and like similar water condition.

The fish will not eat the aquatic plants after you have included the right amount of vegetable matter in the diet. The females gestate for four to six weeks and then release several fry (10-25) depending on their size.

Adults predate on their fry, which is the main is the main reason you should make a maze of plants cover for the young ones to hide.

The Goodeid fish is among the attractive and interesting commercial tropical fish species that you can add to your aquarium. They are very different from the other livebearing fish species and you can recognize them due to their body shape.

Unlike the production of mollies, swordtails, platies and guppies, the males possess fin adaption known as andropodium. The mothers nourish the young ones directly before they give birth, unlike the other livebearers.

The trophotaenia, in goodeid fish, is very similar to the umbilical cords of mammals and it nourishes every fry during the development and falls off after birth.

Generally, they are unknown in the commercial world of tropical fish hobbyists, but they are among the most attractive fish that you can keep in your home aquarium.

Most of them are peaceful and form great community fish. The newborn fry are larger than the newborns of other livebearers, but the size reduces with every drop.

They do not need any special requirements but prefer planted tanks and the temperatures should be above 70 degrees F. Mostly, they prefer 78-80 degrees F. After three years, they do not produce more and you will have to pull them occasionally to increase the number.

The least killifish is among the smallest species of fish in the world. It has a stout body, upturned mouth and rounded caudal fin. The fish have a dark lateral stripe that extends from their snout to their caudal fin.

Their faint bars project toward the back or downward towards the center.

The females exhibit a unique reproductive behavior known as superfoetation, which means that they carry the young ones at various growth stages – from the newly fertilized eggs to the fry that are ready for birth. They do not release all the live fry in one brood.

The pike killifish are cylindrical on both the head and body, are moderately slender and compressed at the rear part. The French name of the livebearer is picadillo and they are light olive-brown dorsally. They transition yellowish-white ventrally.

They also feature small black spots on light green iridescent background on the flanks and dark spot at the caudal fin base.

Moreover, they have large teeth and they are covered with many small scales.

The above is a short review of the commonest livebearing fish species. From the reviews, you can see that livebearers are colorful, hardy and they are full of personality.

Whether you are a beginner in need of a pretty hardy species or you want to preserve the endangered fish species at an advanced level, the species should give you a good starting point. You just need a tank and a pump. 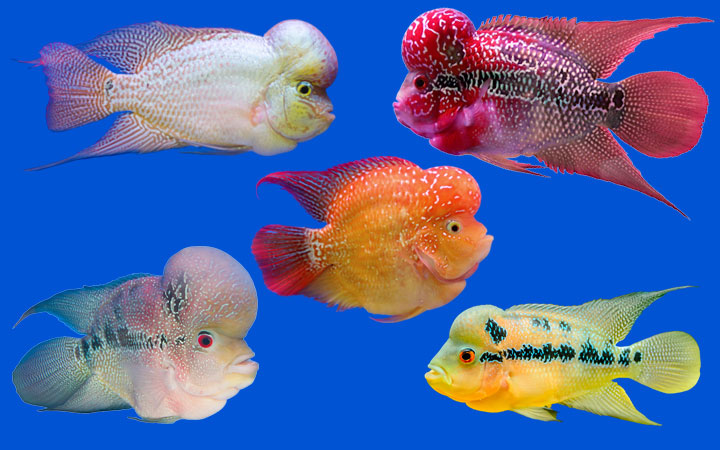 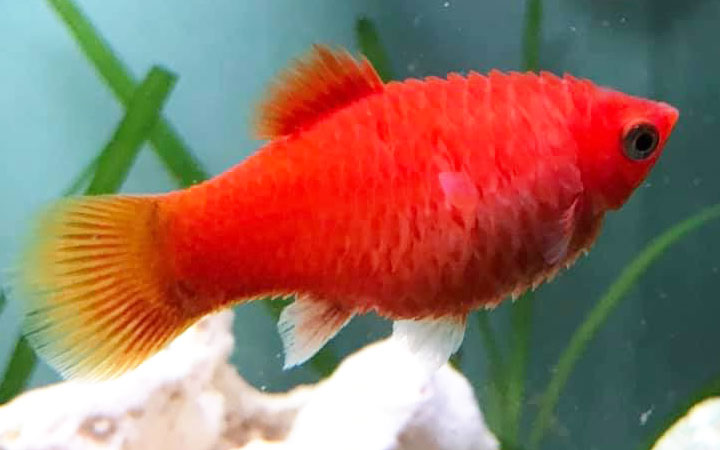 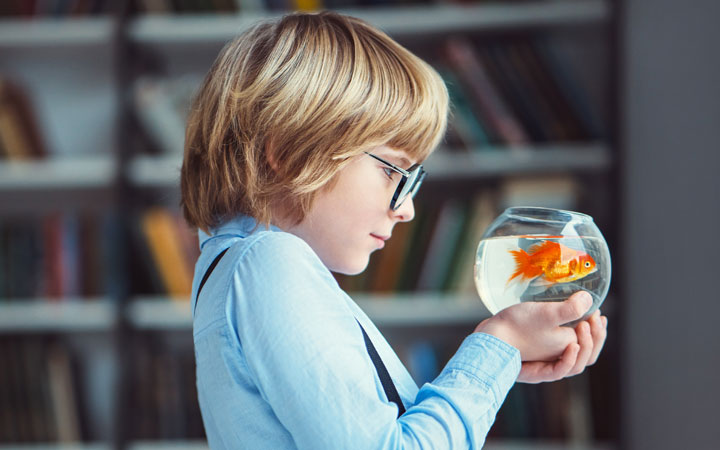 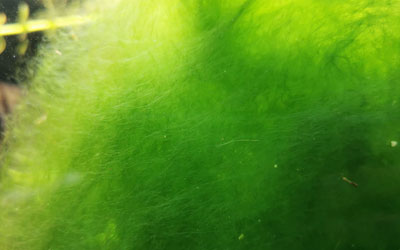 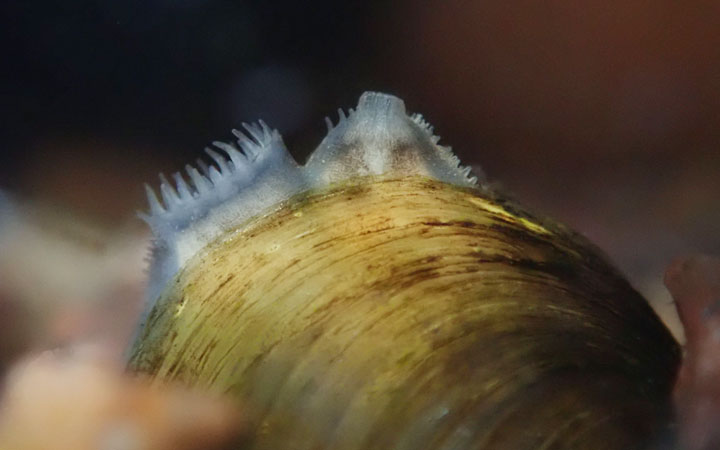