How Long Are Mollies Pregnant For?

Home » Molly Fish » How Long Are Mollies Pregnant For?

Did you know that over 12.5 million (source) households in the US keep fresh-water fish as pets?

And in as much as people rear different types of fish, mollies are the most popular fish in aquariums. This is mainly because they are beautiful, cheap, readily available, hardy and most importantly, easy-to-breed. Additionally, mollies have quite a peaceful temperament, which makes them ideal for community aquariums and tanks

Nonetheless, you’ll need the right information if you’re to thrive in rearing mollies.

Here are several pointers to guide you during your mollies’ breeding periods: 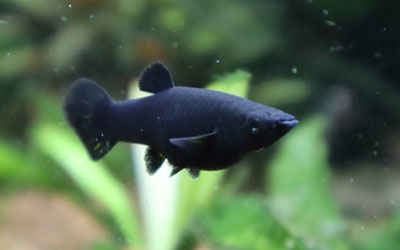 Mollies breed via internal fertilization– the eggs get fertilized by the sperms, develop, and hatch within the female’s body.

As such, mollies don’t lay eggs, but the young ones come out swimming after hatching occurs internally. The gestation period for pregnant mollies is about 60 days. A female molly can store sperms for long periods so that it impregnates itself every thirty days.

Still, there are types of mollies with 50-70 days long gestation period. One example is the Dalmatian molly fish, which births young ones come out ready to live like adults.

What’s more, most female mollies release close to 60 newborns, known as fry, at a time. Most newborns are usually small-sized copies of adult fish. But other fry mollies can have different shapes and colours depending on the parent fishes that mated with each other.

Check out my detailed guide on how to breed molly fish in home aquariums.

How to Tell When a Female Molly is Pregnant?

Since females store sperms, most mollies you’ll find in stores are already pregnant.

To confirm if your mollies are expectant, check for the following signs:

During pregnancy (gametogenesis), most female fish need a diet that’s richer than usual in lipids and proteins.

For the pellets, go for products with nutritional elements such as n-3 PUFA (poly-unsaturated fatty acids), since they are essential for the development of suitable larvae. If you feed your pregnant fish a poor diet, their bodies utilize the perivisceral fat, which is rich in fatty acids for yolk production.

The result is poor-quality eggs as well as reduced larval viability.

How to Care for Newborn Mollies? 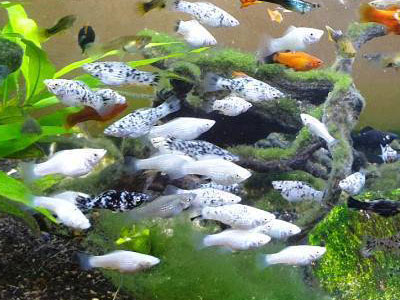 Take note that female mollies don’t care for their young ones.

Once the young ones get hatched, they are on their own. This is why it’s imperative to create a breeding system that will protect and nurture the fry. Mind you, mothers and other adult fish can feed on the fry.

Now there are two major kinds of breeding apparatus you can use:

Also known as breeder net, the breeder box is a small container that gets placed in your aquarium to quarantine off the pregnant female.

The best time to place a female in a breeder box is when she is extremely close to giving birth. This allows the molly fry to fall (after getting hatched) straight into a small, secluded chamber that protects them from any harm.

The fry can grow in the separate chamber unabated till adulthood.

The best nursery tank for molly fry is a six- to ten-gallon tank. And the most crucial features in the tank include:

The filter is quite important in any fish tank. Its main purpose is to remove decaying organic matter, free-floating particulate, excess food, waste, and dangerous chemicals.

If this waste matter doesn’t get removed, the toxicity in the water builds up, and when high enough concentrations, it poisons the fry.

Ensure that your filter has a filtration foam so that the small fry don’t get sucked up with the waste.

Whether natural or artificial, plants cover and protect the fry during the early days after hatching.

Thus makes sure to have broad-leafed plants like Java ferns installed in your nursery tank. Also, float several plants so that newborns get an area to hide immediately after the mother gives birth. Fry are naturally programmed to hide for a while after birth.

They will also avoid anything that moves as much as possible.

Because mollies are tropical fish, it’s important to create a tropical climate for them and the fry.

This means keeping the tank water at a temperature of 72 to 80 degrees throughout. Consequently, you’ll need a water heater and an aquarium thermometer to ensure that the heat temperature is consistent.

All in all, preparation is key when it comes to creating the best fry-care environment. Separating the pregnant fish from other adult fish saves you the effort and time of trying to move newly-hatched fry. So invest in a nursery tank or breeding box immediately you get yourselves a

It’s advisable to start feeding your fry right after they get born.

The best part is that newborn fries have a similar diet to that of adults. Still, you’ll need to feed them in extremely small-sized quantities so that they can ingest the food easily. Most molly owners go for top quality flakes and fish-food for their fry.

Alternatively, you feed them baby brine shrimp. But ensure that all the food is either ground or churned thoroughly before feeding the fry. You should only feed them food that is in powder form.

Additionally, strive to maintain a regular feeding schedule. It’s preferable to feed fry a pinch of food several times a day. Other things that you ought to incorporate while caring for newborn mollies include:

Even with a filter, it’s vital to change your tank’s water regularly to keep the fry healthy.

With this in mind, replace the fry’s water with water from your standard aquarium so that the newborns start acclimating to their eventual home. It’s best to change around twenty per cent of the water in the nurturing tank every day. So if you own a ten-gallon aquarium, take out two gallons a day, and replace it using the same amount from your regular aquarium.

You shouldn’t introduce the fry to the standard aquarium until they’ve grown to a size that’s larger than the mouth of adult molly fish.

In essence, it takes about one to two months for fry to become big enough for standard aquariums.

How to Move Fry to Nursery Tank

When it comes to moving fry from the nursery tank to the standard aquarium, one of the safest methods involves:

The breeding trap acts as the acclimating medium when moving the fry to the normal tank. Ensure to rinse or clean the trap before placing it on the side of the chosen aquarium. Cleaning the trap guarantees good health for both the adult fish and the new fry.

Using a standard aquarium net, transfer a few fry to the breeding trap.

Make sure to move several fry at a time so that the trap doesn’t get so overcrowded that the fry can’t swim around comfortably.

Let the fry acclimate for about one hour before releasing them into the aquarium.

Acclimatization allows the fry to adjust to the change in their environment including the PH, temperature, humidity, pH, and altitude.

As the fry grow into full molly adults, it’s paramount to know the sex of each fish for breeding purposes. 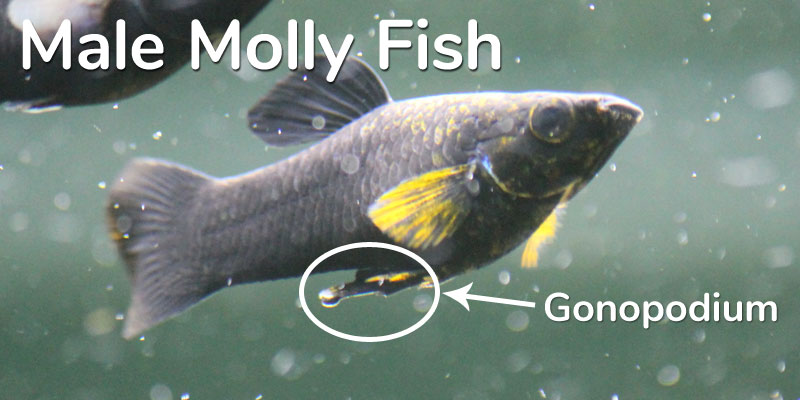 Also, dominant male molies grow large fins and have a more intense natural colour. The fins get used during mating shows or when showing dominance over other males. On the other hand, females have shorter fins. 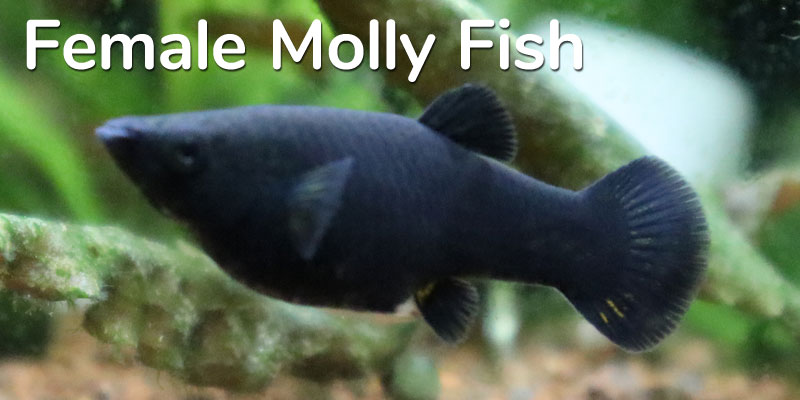 But it’s usually softer and lighter when compared to that of male mollies. Moreover, males feature blazing-hot red coloured pectoral fins while females have no colour on their pectoral fins.

In as much as mollies are arguably the best breeding livebearers, your success rearing them depends on how well you prepare for your females’ gestation periods.

To get healthy and strong fry, always ensure that the fish are in a properly cleaned environment. And don’t forget to feed them appropriately. 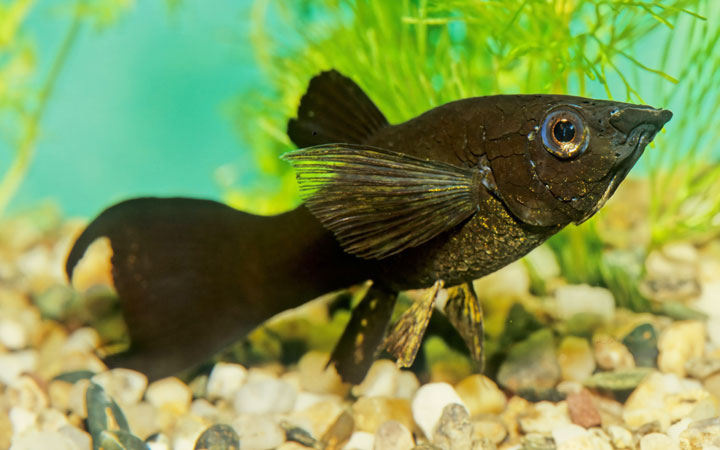 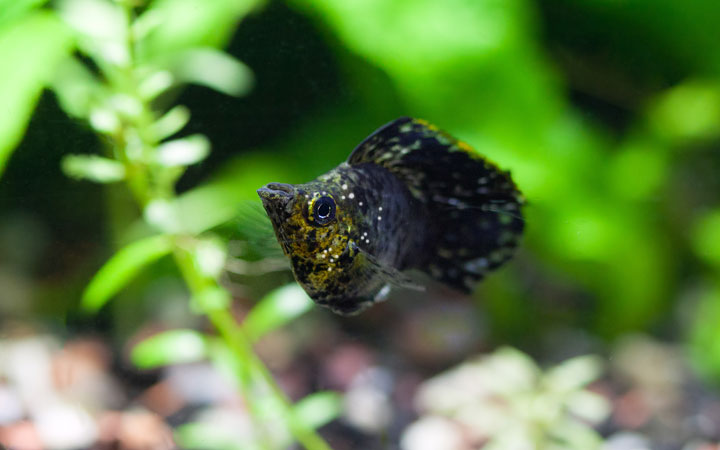 White Spots on Molly Fish – How to Treat Ich Disease? 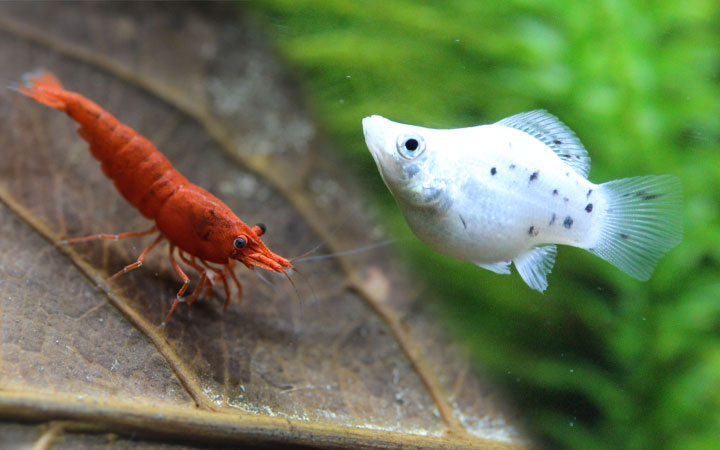 Molly Fish and Cherry Shrimp – Can You Keep Them in Same Aquarium? 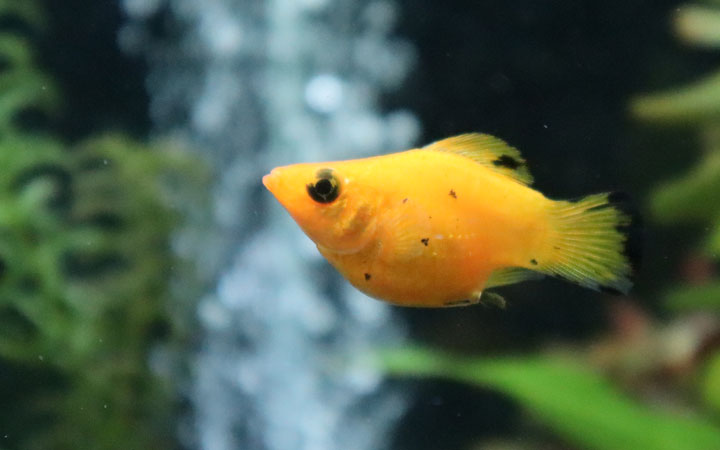 Can Molly Fish Live Without Oxygen?

My molly is very pregnant and must be due any day. I’ve had to put her in a breeding trap because she is being nasty tothe 3 others in her tank. She’s been in there for 2 days so far . is this OK? I’m worried its going to effect her having the fry but I cant leave her inwith the others for her to pick on them .

Usually it is not good to keep any fish in a small space for a long time, but because you can’t say with certainty when she will give birth, and you want to save the fry, it is better to keep her in the breeding box. It happen to me also, that I was keeping my molly fish separated for a few days, and because I was worried about her health I released her into the tank. Once she was free, she started giving birth.