How to Care for Tropheus Cichlids?

Home » African Cichlids » How to Care for Tropheus Cichlids? 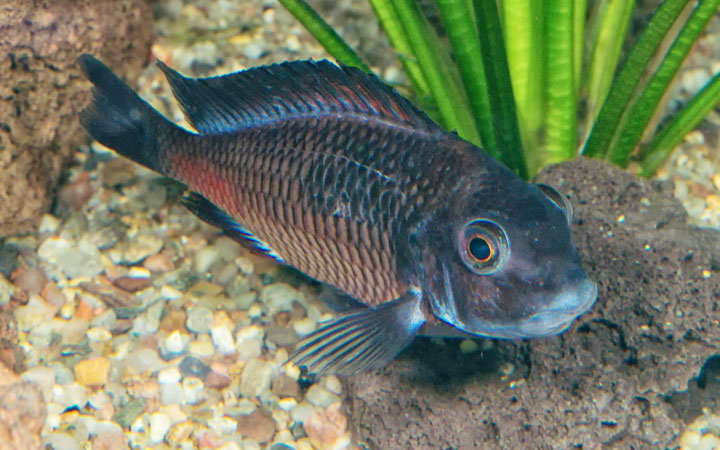 This champion of variety is endemic to L. Tanganyika, Africa and was described over a century ago. The fish was recognized in 1898, becoming the first Tropheus genus to be identified.

Many are identified according to their geographic location, especially where they are discovered. They get their names in relation to their physical attributes such as their color and beauty.

A school of Tropheus Cichlids makes an amazing display of their personality. They usually have a fascinating social structure that’s based on a colony of similar tank mates.

These fish are always active and each displays its own behavior. They can curiously line up to spectate on what is happening in the room or show some dolphin-like antics at mealtime.

However, they are expensive fish and this makes them a little bit difficult for new aquarium hobbyists.

But if you are willing to go the extra mile and take good care of them, Tropheus Cichlids are quite rewarding. All you need is to provide a suitable habitat for them and everything else will fall in place.

The Tropheus Moorii belongs to a very popular genus today. The genus consists of about six species with more than 120 known color varieties. Four out of the six species display various color morphs. Regardless, these fish are diverse with each species possessing its own beautiful coloration.

The Tropheus Moorii are moderately deep-bodied fish. They have larger heads in proportion to their bodies. In essence, their bodies narrow toward the tail and their caudal fins are fan-shaped.

This fish species can live up to 10 years depending on their habitat. Obviously, with good conditions in the tank, they can live beyond 10 years.

Their color varies greatly depending on their origin. Some of them can be solid-colored with broad bands, while others can have large blotches or even two red/yellow bands across their midsection. Their heads, upper back, and fins have various amounts of coloring.

In the wild, the Tropheus Cichlids prefer freshwater habitats with an efficient flow of water. Their native habitat, Lake Tanganyika is well oxygenated throughout with plenty of aquatic plants.

These fish can be found as deep as 6.5 to 10 ft in their natural habitat. They mainly inhabit shallow waters found along the rocky coastal areas.

Their habitat is usually rich in algae growth, plenty of solid rocks, interlocking rubble and sandstone slabs. That is why they are always classified among the herbivorous rock-dwelling African cichlids. 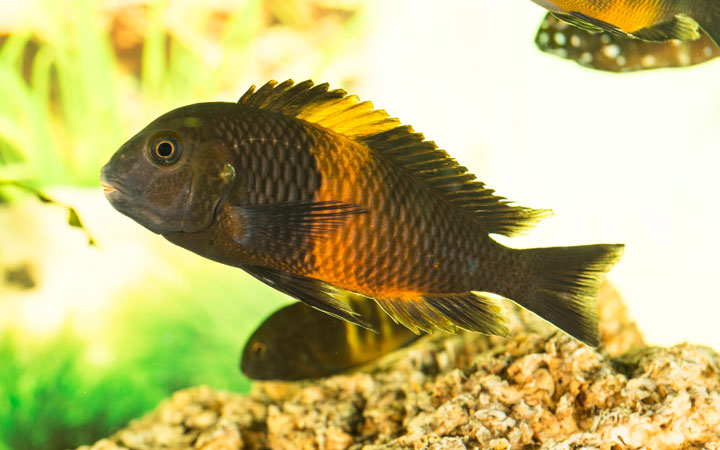 Before you are going to purchase Tropheus cichlids you need to consider a few things, such as tank size, substrate and decorations for the tank.

One thing that makes the Tropheus cichlids a unique tank fish species is their ability to swim in all regions of the aquarium.

The fish is highly aggressive and territorial. This means that it requires a specious tank if you keep it with other tank mates.

The ideal tank should be at least 4ft long with a 75-gallon capacity for about 12 or more fish. Keep in mind that a single fish in this genus can grow to an average length of 5.75 inches (15centimeters).

So they will need a larger tank to accommodate them and allow them to swim freely.

The most recommended substrate for the Tropheus moorii is either sand or small-sized gravel. You can also add some crushed coral or aragonite sands to keep the pH levels up.

Since the fish inhabit rocky coastal areas of Lake Tanganyika, their tank must have a few pebbles in addition to the sand substrate. Likewise, you may pile up some rocks to create the ideal environment at the tank bottom for them.

Provide several rock piles to the tank to create a desirable environment for your Tropheus Cichlids. Use some rocks to form caves where they will hide if need be.

You may include some aquatic plants to make the entire set up lively. The same plants will provide the fry with safe places to hide from predators.

Hardy species such as Sword Plants are ideal for a tank with Tropheus Cichlids. Others include Anubias, Java Fern, and Water Fern. Place them in the middle ground or background to create more room for your fish to swim around.

The Tropheus Cichlids need proper maintenance of tank water quality. These fish cannot survive in unfavorable conditions. Make sure to carry out partial water changes. At the same time, remove any leftover foods that might contaminate water in the tank.

Do at least 15% of water changes twice a week. Or perform a 30% water change once every week. Let these changes be determined by the available stocking numbers.

For TTropheus Cichlids, their water requires some buffering and proper maintenance through regular water changes. These fish thrive well in freshwater or brackish freshwater.

To achieve these conditions in their tank water, you must consider adding some salt to act as a buffering agent. Salt increases carbonate hardness in the tank.

Apart from using salt, you may also go for the chemical filtration method that allows water to pass through several layers of coral sand or crushed coral.

Ensure that salinity in water is 10% when using a buffering agent. Other conditions that you should observe is the pH level. The best pH range for the Tropheus Cichlids is 7.0 to 9.0.

Water hardness should be 10 to 15 dGH. And the required water temperature has to range from 76.0 to 82.0 degrees Fahrenheit.

The Tropheus Cichlid is an omnivore. They feed on some microorganisms and algae found on the rocks in the wild. But you can provide them with spirulina based flakes and pellets.

Spinach and romaine can supplement their usual diet once a day. Their diet should also contain large quantities of fiber for better digestion.

Include some live food in their feed as well. Examples of live foods that you can feed them include Mysis and Cyclops. But avoid slimy or soft foods, Tubifex, beef heart, brine shrimp, or mosquito larvae.

Feed your Tropheus Cichlids proteins in moderation. Too much protein is likely to cause bloat. On the other hand, you may give them fish frozen brine and some plankton to add a variety to their staple diet.

While feeding them, avoid giving them excess food. This can contribute to cases such as bloat and other digestive problems. Give your fish enough food at least three times per day.

Feed them in small quantities to avoid food wastage. The main reason for feeding them on small pinches is to maintain water quality in the tank for a longer time.

Generally, the Tropheus Cichlid are easy to moderate when it comes to keeping them. This is only when you do the routine water changes and feed them on a proper diet. But when you neglect them, they can be difficult to keep in captivity.

The Tropheus Cichlids are very aggressive but can do better in a well set up species-specific aquarium. Keep them in groups or a community of about 12 or more.

One or two males in such a group is a good idea to avoid unnecessary conflicts. Large numbers of females will help to reduce the aggression of the males.

You may keep them in a large tank with several herbivorous rock dwellers of the African Cichlid genus.

Never keep your Tropheus Cichlids with slow swimming fish or carnivores. This is because they are extremely voracious eaters, which means they will consume anything they come across in the tank.

It is easy to breed the Tropheus Cichlids in captivity. Just look for a group of about 12 or 20 juveniles and place them in a 90-gallon tank to form a harem. A large number of females will ensure the success of breeding your fish as it neutralizes the aggressiveness of males.

During the mating season, the dominant males will try to court females in what might look like a circling dance. The female will eventually lay eggs for the male to fertilize.

Once fertilized, the female will take the eggs into her mouth. The fertilized will remain there throughout the incubation period. She will then hatch and hold the fry until they are large enough to fend for themselves.

You can feed the young fry on crushed flakes after they have been released by their mother. If there are other fish species in the tank, remove the fry and take them to a separate tank. This is to prevent other fish from preying on them.

The Tropheus Cichlid is a unique freshwater species of fish. The fish is native to L. Tanganyika in Africa, where it is widely distributed throughout the lake. It inhabits shallow waters, especially across the rocky coastal regions.

Most aquarium hobbyists like them because they are algal grazers, meaning that they control algae in the tank.

With the right tank requirements, ideal water conditions, a healthy diet, and suitable tank mates, the Tropheus Cichlids can become an easy or moderate fish to keep.

So if you are an intermediate or experienced aquarist, you should consider adding this fish to your favorite aquarium pets. 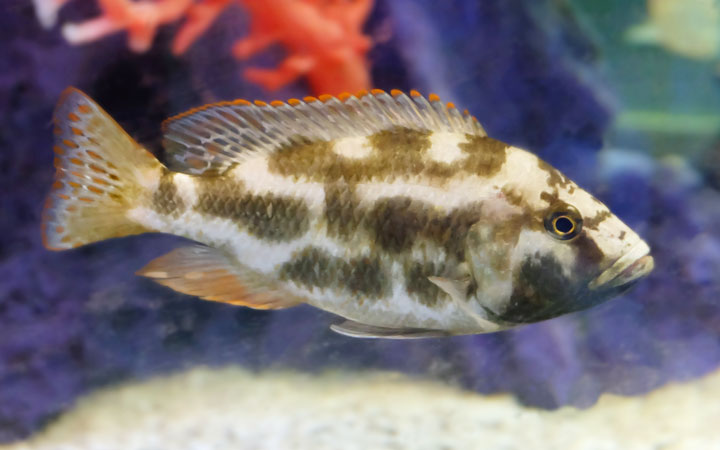 How to Care for Livingstonii Cichlids? 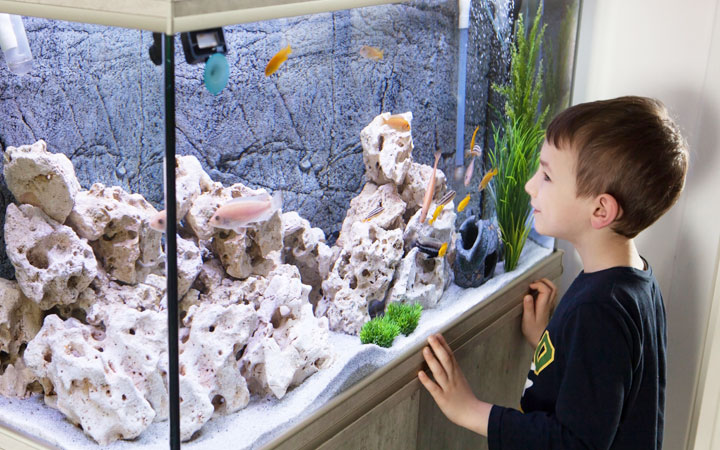 Are African Cichlids Easy to Keep? 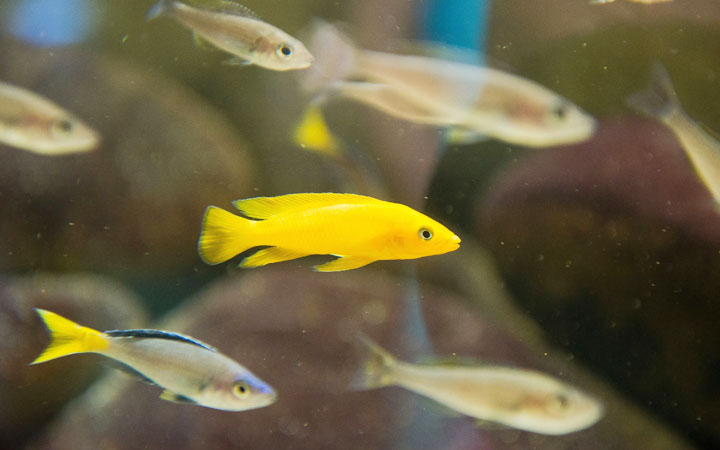 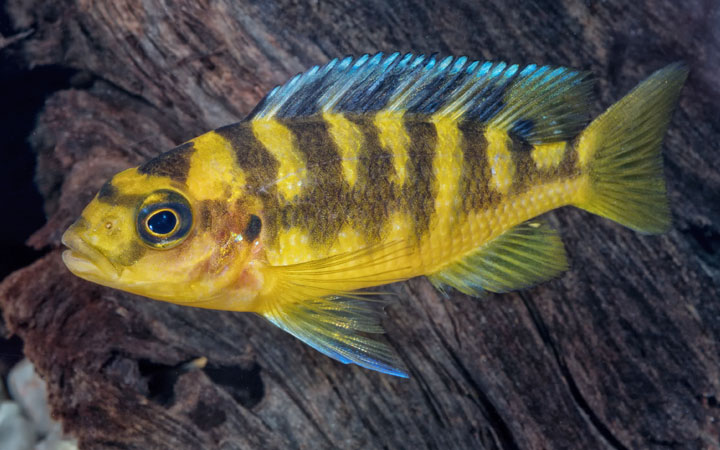 How to Care for Bumblebee Cichlids?